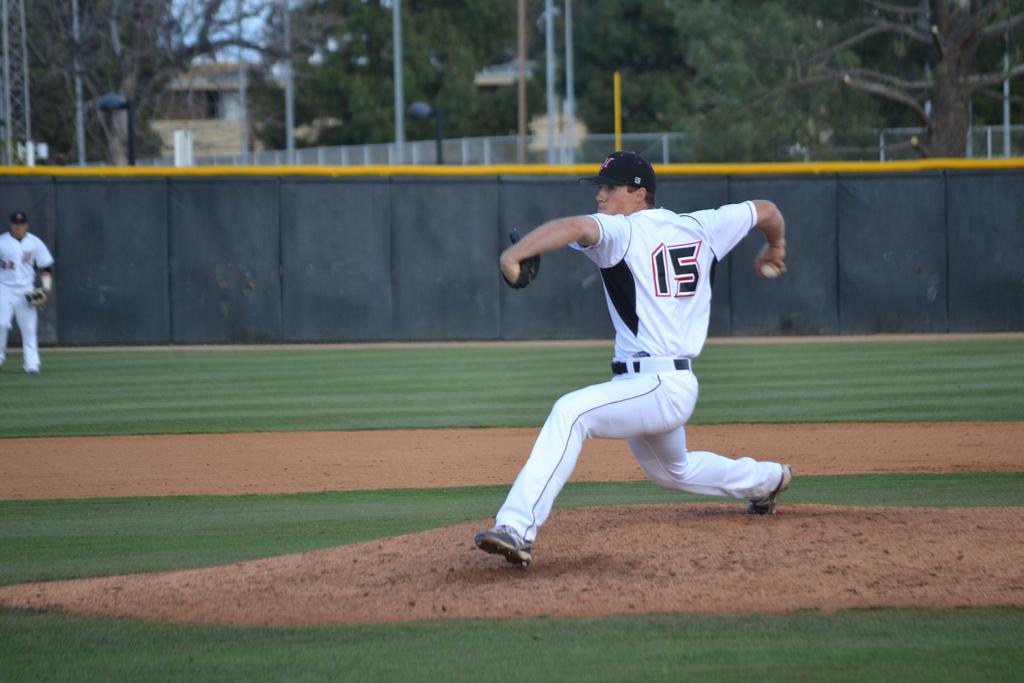 Thirty minutes after surviving a nerve-wracking slugfest of a Game 1 in which he pinch-ran a crucial run for CSUN (15-19, 3-5 Big West), pitcher Alex Muren got on the mound for Game 2 to make sure the Mustangs’ powerful offense was held in check at least once Saturday afternoon at Matador Field.

Eight Cal Poly hits later, it was clear that offense dominating defense was going to remain the theme of the afternoon, much to Muren’s dismay.

“(Cal Poly) did things that put pressure on us and we just didn’t execute and didn’t answer,” said the right-handed pitcher after the Mustangs put up eight of their 12 Game-2 hits against him to beat CSUN 6-1 and even the Big West series.

Even Muren, the Matadors’ leader in games won this season, couldn’t do much to slow down the swing-happy Mustang bats – which also collected 13 hits during an 11-inning 6-5 Game 1 loss. Muren (5-4) allowed four runs and had five strikeouts before being chased in the fifth inning.

After CSUN matched Cal Poly’s 13 hits during the first game of the day, Muren didn’t get much run support in Game 2. The Matadors had six hits in it, but squandered golden opportunities to get on the board early.

The biggest came in the bottom of the third inning when CSUN loaded the bases with two outs before right fielder Miles Williams popped up to the shortstop, accounting for three of nine Matadors left on base for the game.

“We had our chances early and didn’t do enough of a good job there,” CSUN manager Matt Curtis said.

Cal Poly (21-12, 5-3) had been held to one hit and the game remained scoreless up to that point. That changed in the following inning as Mustang right fielder David Armendariz hit a linedrive RBI double down the left that barely stayed fair to open the score.

The Mustangs, whom Curtis called “the best offense in the league,” combined for six more hits and three runs over the next two innings to up their lead to 4-0. The last run scored before Muren was removed from the game occurred when Cal Poly first baseman Tommy Pluschkell tried to steal home and the pitcher failed to stop him because he couldn’t handle a throw from third base at the plate.

It was clearly not Muren’s day

“You got to take full responsibility,” Muren said. “I didn’t go out there and do my job.”

On the other side, Cal Poly pitcher Kyle Anderson (6-1) did. The left-hander scattered the six CSUN hits, walked two and ended up with a 2.00 ERA.

“We were kind of struggling with the lefty,” said CSUN third baseman Michael Livingston, who had three of the team’s hits. “But we just got to bear down and hit the ball.”

CSUN had another multiple-men-on-base situation in the seventh inning. After Ryan Raslowsky had an RBI single to cut his team’s deficit to 5-1, the Matadors had a man at first and another at second with only one out.

Anderson retired the next two batters, however, shredding away the Matadors’ hopes to make it a game.

“It always hurts to not get any runs,” Livingston said.

Brandon Warner relieved Muren and pitched 3.1 innings, giving up four hits and two runs. But for this particular game, CSUN was in more dire need of better offense, not better pitching.

“I’ll tell you what, giving up six runs, really five (earned), that’s not a bad job,” Curtis said of Muren. “We just needed to do a better job offensively in the second game.”