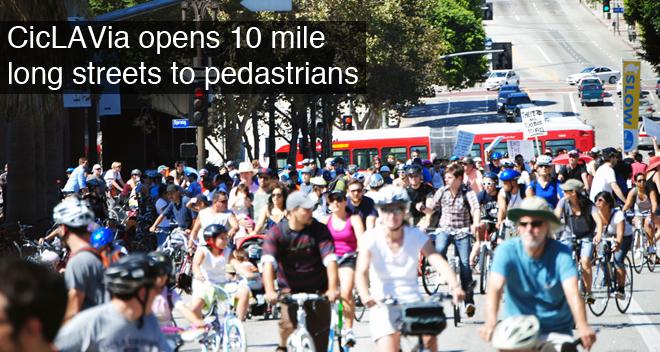 A mob of cyclists at CicLAvia wait for traffic to cross at the corner of Spring and 5th Streets in downtown Los Angeles on April 15. Photo credit: Carl Robinette / Daily Sundial

CSUN students and other members of the community rode bicycles into downtown Los Angeles to participate in the city’s fourth CicLAvia event Sunday.

The city sanctioned event shut down 10 miles of city streets from the east end of Hollywood to East Los Angeles, making way for cyclists, pedestrians and everything in between.

“CicLAvia is an excellent event,” said Dennis D’Alfonso, a ride organizer and leader of the CSUN Bike Collective.  “It gets the community together and raises awareness about active transportation.”

Led by members of the collective, a group of 12 riders met in front of Oviatt Library at 7:30 a.m. and pedaled to the North Hollywood Metro station. Picking up more riders along the way, the group tripled in size by the time they arrived in NoHo.

Bikes in tow, they boarded a Red Line train and headed for the corner of Melrose Avenue and Heliotrope Drive, where they met thousands of cycling enthusiasts.

“I was like, ‘Wait. They shut down the entire road?’” said Clarke Miranda, bike collective organizer, talking about his excitement when he heard about the first CicLAvia event.  “CicLAvia rocks. You can be a walker, runner, cyclist, roller blader or anything that makes you move.”

Estimates counted a crowd of about 100,000 participants, according to the LA Times, with no serious incidents or injuries reported.

D’Alfonso and Miranda also volunteered as “route angels,” offering mechanic help to fellow riders who ran into bike trouble along the zig-zag of open streets.

“I saw it last year when I was working downtown,” said Bell resident Arian Nava, 20, as D’Alfonso quickly repaired the malfunctioning gears on her bike. “I thought it was beautiful, but I was working.  Luckily, today I’m not.”

CicLAvia was inspired by the Columbian “ciclovía,” which roughly translates from Spanish to bike-way. In Columbia, officials shut down 75 miles of road in the city of Bogota every Sunday for the ride. While L.A.’s event is not at the scale of its South American counterpart, it is growing with each installment.

“I think it’s great. A lot more businesses embraced it this year,” said Jaziel Ocampo, cyclist and sophomore anthropology major at CSUN. “A lot more people set up shop outside their stores.”

Food vendors, musicians and other merchants and organizations lined the streets to take advantage of the crowds and participate in what was a celebration of clean air and community.

The CSUN group thinned and spread out on the city streets, but members of the collective stayed on their bikes until the event officially ended at 3 p.m. for a total of more than eight hours.

“Who closes 10 miles of road down for bicycles?” said Charles Han, art major at Pierce College who road with the CSUN group. “It’s really cool that Los Angeles would do this.”

The ride was in cooperation with Chinatown’s first-ever Springfest, a festival created to benefit LA Conservation Corps and The Chinatown Service Center Youth Center.

The next CicLAvia is already being planned and is expected to take place within a few months, according to several participants and organizers.