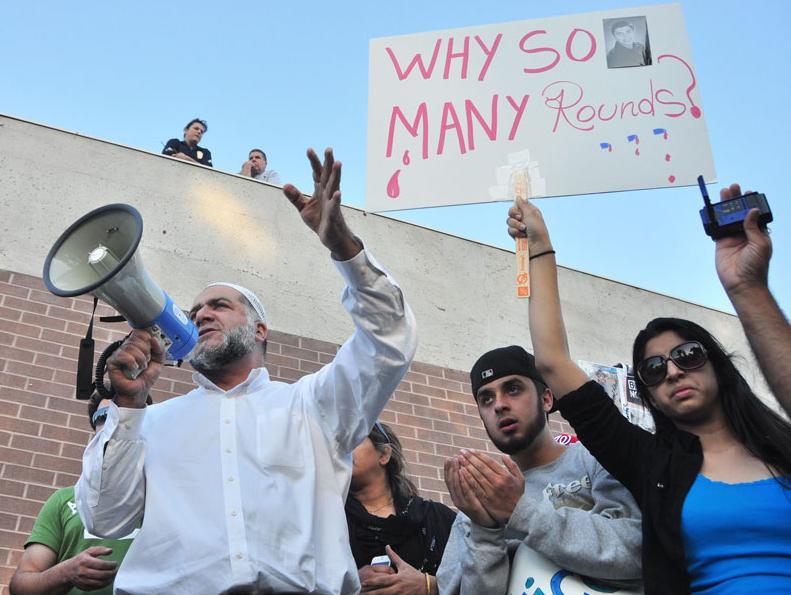 Imam Omar Jubran addresses a crowd of community members protesting outside the Devonshire LAPD department seeking justice for the shooting of 19-year-old Abdul Arian. Police watched from the roof of the department on Monday. Photo credit: Ken Scarboro / Editor in chief

Community members from and various Islamic groups protested outside the LAPD Devonshire division Monday, demanding an investigation into the police shooting of a 19-year-old man after a high speed chase last week.

Abdul Arian was shot dead by LAPD early April 12 after leading police on a high speed chase down the 101 freeway. Initial police reports stated Arian was on the phone with 911 dispatch and told them he had a gun.  After pulling to the side, Arian got out of his car, took what police described as a “shooting stance,” then was shot numerous times.

Imam Omar Jubran, who sits on the executive board of the Council on American-Islamic Relations, said the demonstration was largely community organized through email chains and information distributed in Islamic centers and prayer halls.

“What we believe, as a community, was that this was an overkill,” said Jubran, adding, “He didn’t need to be shot 90 times in his body.”

Lt. Andy Neiman, LAPD media relations officer, said there were no official numbers on how many shots were fired.

“In events of this magnitude we reach out to the community, and in this case we reached out to the Muslim community, Islamic community,” said LAPD Cpt. Kris Pitcher of the Devonshire Division. “To basically let them know what is being done with the investigation and find out what their concerns are.”

“We just want a thorough investigation and we want justice,” Jubran said.