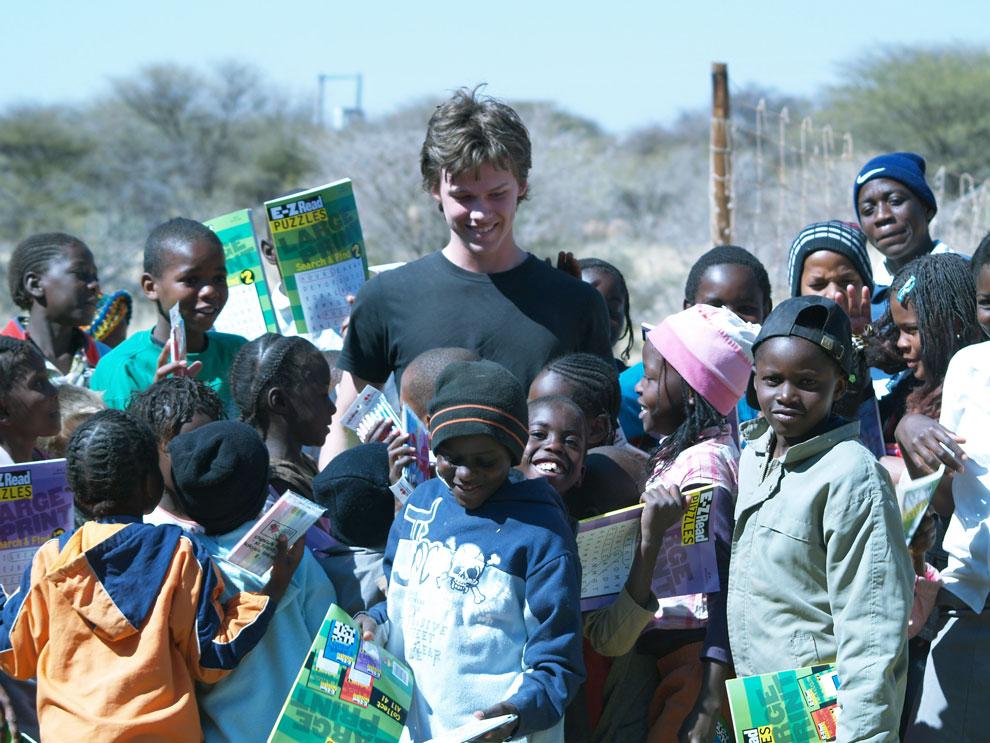 CTVA junior Devon Frankel, center, smiles among the children he worked with during a four-week vacation in South Africa in 2009. The children's schoolhouse was in an abandoned tire factory, and Frankel provided them with crossword

While most college students were busy hitting the beach, or sleeping in past noon, Cal State Northridge student Devon Frankel did something a little different one summer.

Frankel, a CTVA junior, accompanied his mother on a four-week vacation to South Africa in the summer of 2009.

“My mom has a thing for helping people out, so she would go down there specifically to help kids. That would be my first time there,” Frankel recalls.

Ten thousand miles and a 35-hour plane ride later, Frankel arrived to a little town known as Nebbia, approximately four hours away from any major city and 782 miles away from Cape Tow, the remote city of Botswana.

“South Africa was absolutely stunning. Everyone there was so kind and welcoming. I felt at peace,” Frankel said.

After a week of breathtaking scenery and mesmerizing sightseeing, Frankel quickly felt at home.

One afternoon, his mother asked Frankel if he’d like to take a quick trip down to the local schoolhouse, which was located just 100 yards from the lodge where Frankel and his mother were staying.

Frankel agreed and took along with him various crossword puzzles, DVDs, a soccer ball and some footballs for the children’s enjoyment.

When they arrived Frankel was surprised to see where the schoolhouse was located. An abandoned tire factory served as the location where 30 students between grades K-12 learned.

The children of the schoolhouse graciously received their donations. The Frankel’s donation included a variety of crossword puzzles, children’s books, and copies of Frankel’s DVD “Undertow,” a film he starred in.

“We taught some of the children a little English and some American customs,” Frankel said.

After that afternoon’s trip Frankel knew he had to help even more. He devoted his last three weeks in South Africa to helping the local schoolhouse.

“I played a lot of outdoor games with them, (and) we donated several soccer balls,” Frankel said. “(They) had no idea what a soccer ball was, in fact.”
Frankel spent several of his days playing soccer with the local children and helping them out during art and crafts time. During his time at the schoolhouse, he quickly formed a unique bond with one 9-year-old boy named Maniki, whose named translates to “No Name” in the African language.

Maniki was an orphan outcast, Frankel said. He had a tear drop scar on his left eye and he struggled to make friends.

“I managed to get Maniki to play soccer with the other kids. He wasn’t very good so he was embarrassed and ran off to chop wood. That reminded me a lot of myself,” Frankel recalls.

Frankel and Maniki had no means of communication.

“I hardly spoke a single word to Maniki, but I knew he understood me through my actions. I felt so connected to Maniki,” Frankel said.

“You don’t need language to connect with someone. Maniki and I got along great without even talking most of the time,” Frankel explains.

The two spent most of their time together exploring the area and playing soccer.

Despite their language barriers, Frankel learned more from that little boy than he could have ever imagined.

“You really don’t know how easy we have it,” he said. “Most of the families have nothing but the clothes on their backs. Most families lived in a shipping crates, but had the biggest genuine smiles I’ve ever seen.”