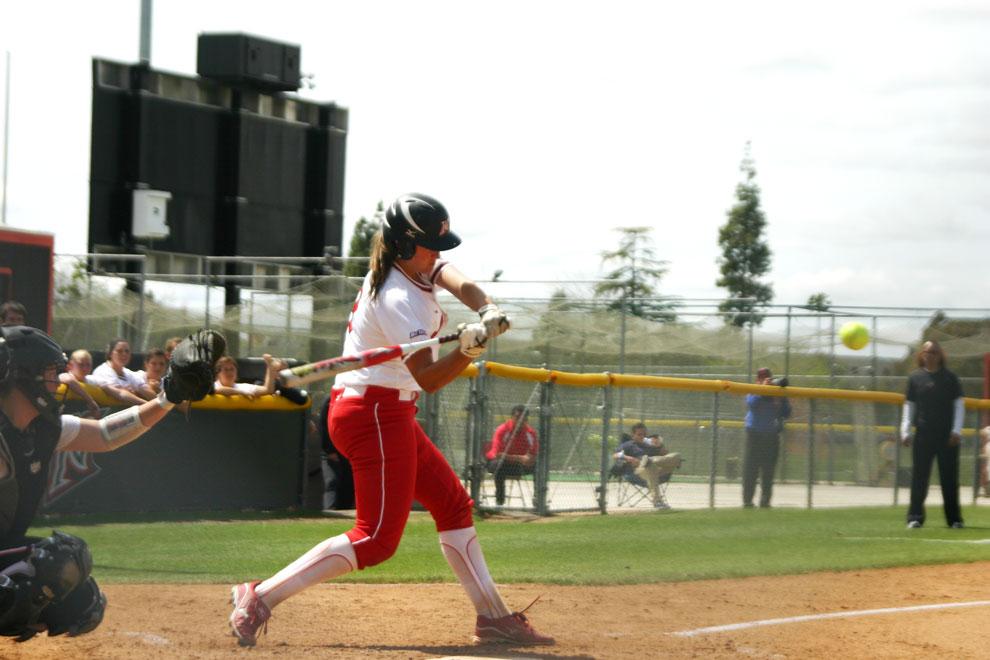 CSUN catcher Mikayla Thielges swings at a pitch during a game against Oregon State on March 28. Thielges and the Matadors take on UCLA on the road today. Photo Credit: Yoko Maegawa / Contributer

As Mia Pagano’s first grand slam of her life went over the left wall at Bob Janssen Field – pointing the way to a 4-0 CSUN win Saturday against Cal Poly – an array of emotions fluxed through her.

“I didn’t even know how to react,” Pagano said. “(My teammates) were so excited for me. It was just the best feeling.”

Pagano, who also took the mound on the day, not only matched a career high with four RBI, she was also the winning pitcher after only allowing two hits from the Mustangs.

With the exciting win now behind her, Pagano is looking for new thrills. The Matadors heading to Westwood to take on No. 15 UCLA today is a start.

“I’m actually really excited because (the Bruins) are a very tough team and I want to face those good hitters,” Pagano said.

With the win against the Mustangs becoming only the eighth of the season in 39 tries for the Matadors (8-31), Pagano’s words carry quite a bit of boldness. The UCLA hitters are tops in the Pac-12 Conference, hitting .357 with an impressive 62 home runs in 2012.

The Bruins (29-12) count with a seemingly endless number of proficient hitters. Two of them are elite: freshman infielder Stephany LaRosa and senior outfielder Katie Schroeder, who are hitting better than .430 while combining for 117 hits in the year.

While CSUN hasn’t been on the winning side too often in 2012, it has shown signs of improvements as of late, particularly on the offensive side. The Matadors have averaged 7.2 hits per game in their last five outings.

Unfortunately for them, they only had the Saturday win to show for the solid offensive stretch. But Pagano still sees her team going in the right direction, partly the reason why she seems unfazed at the mighty challenge the No. 15 Bruins represent.

“Just to prove to everyone that we’re a competitive team and that our record doesn’t show how good we really are,” she said.

It’s not only Pagano who feels that way. CSUN catcher Mikayla Thielges, who has 23 hits and six home runs this year, said the Matadors are “definitely getting better.” She also recalls the beginning of the Big West Conference schedule in which CSUN visited current-first-place Pacific and took two of three games from it.

The losses are the only ones the Tigers have suffered in Big West play so far.

“We just have got to work together and have that fire and that excitement we had (at Pacific),” Thielges said.

The junior also recognizes that CSUN isn’t having the best year, but she says that doesn’t deter her nor her teammates.

“Losing’s not fun, obviously, but it’s making us better people,” Thielges said. “It’s teaching us how to find positives and just work through it.

Against the ranked Bruins on the road, the Matadors have their work cut out for them, but they like their chances.

Another grand slam and/or superb pitching performance by Pagano sure wouldn’t hurt, though.

“It’s never a doubt of whether we’re capable,” Pagano said. “It’s just giving the little extra when we need it.”