Baseball: Matadors keep up with No. 11 UCLA before seven-run seventh inning does them in on the road 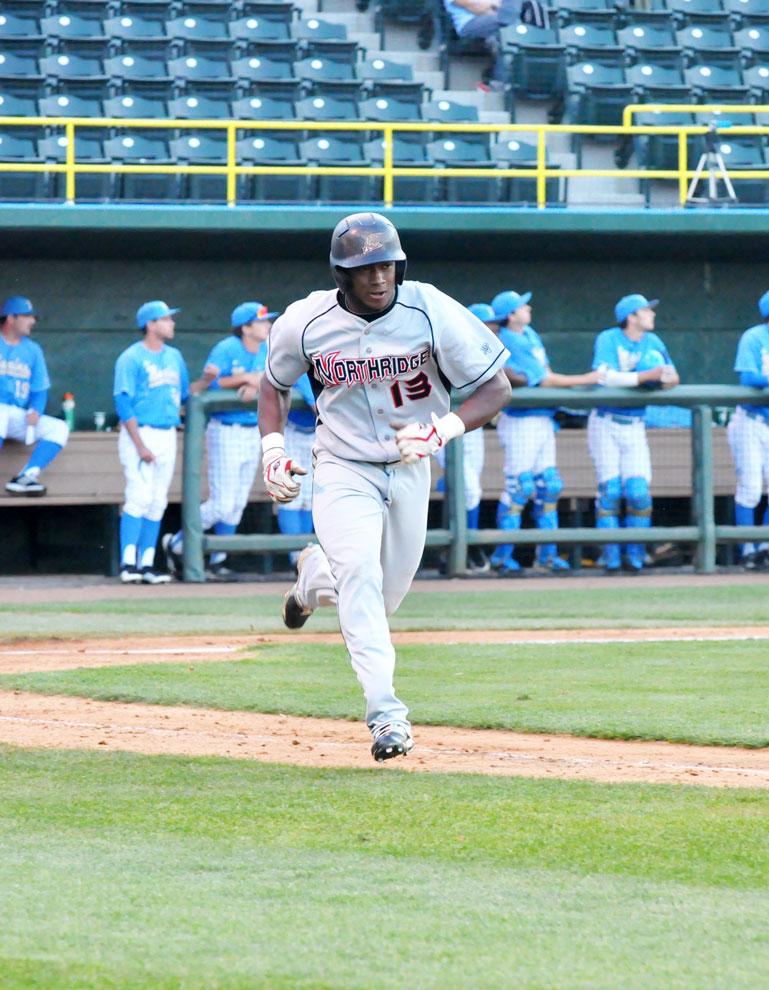 CSUN outfielder Miles Williams tries to reach base at Jackie Robinson Stadium Tuesday. The Matadors hung with No. 11 UCLA early on, but faltered in the seventh inning. Photo Credit: Mariela Molina / Photo Editor

WESTWOOD – The Matadors hadn’t forgotten an embarrassing 19-7 loss in their home opener on Feb. 21 to their rivals from Westwood.

At Jackie Robinson Stadium for a second go-round against the No. 11 Bruins Tuesday night, CSUN came out swinging, scoring early and taking a 3-2 lead in the fourth inning.

“(The home opener) was on our mind and we definitely wanted to get back at (the Bruins) for that loss they put on us,” CSUN’s Nate Ring said.

Similar to the first meeting, the CSUN bats kept up with the mighty Bruins in the initial innings. Unfortunately for them, that wasn’t the only resemblance to the first game.

Once again, the wheels fell off in the latter innings of the game for CSUN as it allowed seven runs in the seventh en route to a 12-4 defeat to UCLA (25-8) in non-conference play.

“That’s kinda been the history against UCLA, we play with them early and then it gets away from us,” said Ring, whose team trailed 10-7 going into the eighth inning of the Feb. 21 meeting before giving up nine runs. “It’s frustrating when that happens.”

By the seventh inning on Tuesday night, CSUN (16-20) had relinquished its 3-2 lead, but only trailed 6-3. But then the frame became one to forget for the Matadors.

In the dreadful inning, CSUN allowed five runners on base before retiring the first batter. The Bruins brought up 11 men to the plate and recorded eight hits and only left one runner stranded by the end of it.

“Once (UCLA) started hitting the ball pretty well, we had a couple mental errors on defense and mentally we kinda shut down and didn’t get things going after that,” said CSUN first baseman Cal Vogelsang.

Despite the disheartening defeat, Vogelsang took some positives from the outing.

“We hung with them for seven solid innings, we did pretty well,” said Vogelsang, who had three hits. “UCLA is a solid team, they do everything. Forget about the seventh inning.”

CSUN took the lead in the top of the fourth with a double from Ring, who had two hits and a RBI for the night. The hit drove in Steven Keller from first base to give the Matadors the 3-2 advantage.

Northridge didn’t hold the lead for long as the Bruins scored two runs in the bottom half of the inning. UCLA catcher Trevor Brown kicked off the scoring inning with an infield single. He later advanced to second on a single by Pat Valaika, bringing Pat Gallagher to the plate with two on and one out.

Gallagher delivered a base hit to right field, which brought home Brown for the 3-3 tie. That ended redshirt freshman Louis Cohen’s day on the mound. Cohen pitched 3.1 innings and allowed seven hits.

Reliever Brandon Warner, a freshman, allowed a RBI single against the first batter he faced, giving UCLA a 4-3 lead and charging another run to Cohen. Warner got the next two batters out to end the fourth.

CSUN used five pitchers. Cohen got his second loss of 2012.

“It’s a different environment here, it’s a night game, nice facility and there’s some nerves that go with that,” said CSUN head coach Matt Curtis about his young pitchers. “They’re growing and it’s a function of the inexperience we have.”

The Bruins had 18 hits compared to the Matadors’ 11.