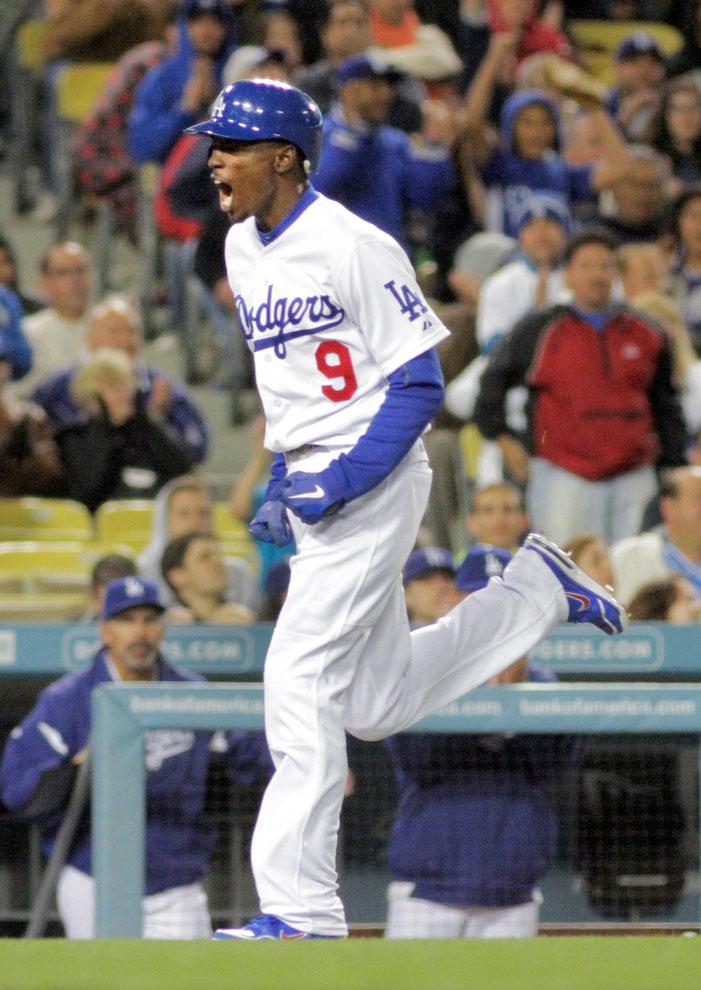 Dodger Dee Gordon runs to home plate after a Juan Rivera single in the seventh inning against the Pirates at Dodger Stadium last Wednesday. The Dodgers, along with every other Los Angeles team, are currently having a remarkable season. Courtesy of MCT.

Some cities are happy with having one successful team in one of the major professional sports, but the Los Angeles Lakers, Clippers, Dodgers, Kings and Galaxy have their fans gushing with excitement from the successes each team has been having as of late.

The purple and gold have been proving the naysayers wrong since guard Kobe Bryant went down with a shin injury. Resting Bryant before a playoff run has been essential for the No. 3-seeded Lakers, but not many could have predicted the success head coach Mike Brown’s team would have without the NBA’s leading scorer.

The Lakers have been without the all-star guard for six games and have been the victors in four of those, including wins over the No. 1-seeded San Antonio Spurs and last year’s NBA champs, the Dallas Mavericks.

But make no mistake about it, to make a serious run at the title, the Lakers will need Kobe back soon.

Big men Andrew Bynum and Pau Gasol have done wonders for L.A. in the paint and on the boards while guard Ramon Sessions continues to prove his worth as the regular season nears its end.

The inconsistent bench of the Lakers have been called the worst in the league, but have done enough in these past games to demand some recognition from Western Conference foes and Laker-haters alike and should help LA go deep in this year’s playoffs.
Clippers (38-23)

The Clippers are 12-2 in their last 14 games, a span that includes two victories over the Oklahoma City Thunder. Chris Paul has been key for L.A. in his first season with the team and the Clippers are slowly trying to make their way past the big-brother Lakers for the No. 3 seed in the Western Conference.

Paul and forward Blake Griffin have helped the Clippers average nearly 98 points per game and are one of the most electrifying teams in the league.

The new-found glory of the Clipper Nation has fans buzzing all over L.A. in hopes that one day they too will have a banner hanging in the rafters of the Staples Center.
Kings (lead 3-0)

The Kings have surprised all of the NHL by knocking around the Vancouver Canucks in the opening round of the playoffs and are one win away from taking down the top seed in the west.

In their last win, the Kings held the Canucks’ fifth-ranked offense scoreless and still have another home game to finish off the series on Wednesday.

L.A. hockey fans have had to deal with the annoying neighboring Anaheim Ducks’ fans for the past years and finally have a chance to flaunt their success if they can pull off the upset.
Dodgers (9-2)

The boys in blue have had one of the best starts in franchise history and are  9-2 in 2012.

L.A. is in line to match its 12-2 start from the 2005 season and with the bats of outfielders Matt Kemp and Andre Ethier, fans will have lots to cheer about this season.

Kemp and Ethier have hit their team to the top five in runs scored and have combined to hit nine home runs so far this year.

Starting pitcher Clayton Kershaw is looking for an encore performance from last year’s Cy Young campaign, but the arms of Chad Billingsley and Aaron Harang have worked as the perfect compliment for the Dodger rotation.
Galaxy (2-3-0)

Midfielder David Beckham and Co. have struggled in the early parts of this season, but the MLS Cup still belongs to the reigning champions.

Forward Robbie Keane and veteran Landon Donovan will have to lead the offensive charge for L.A. while former CSUN defender Sean Franklin can help the Galaxy get on top of the MLS ranks once again.