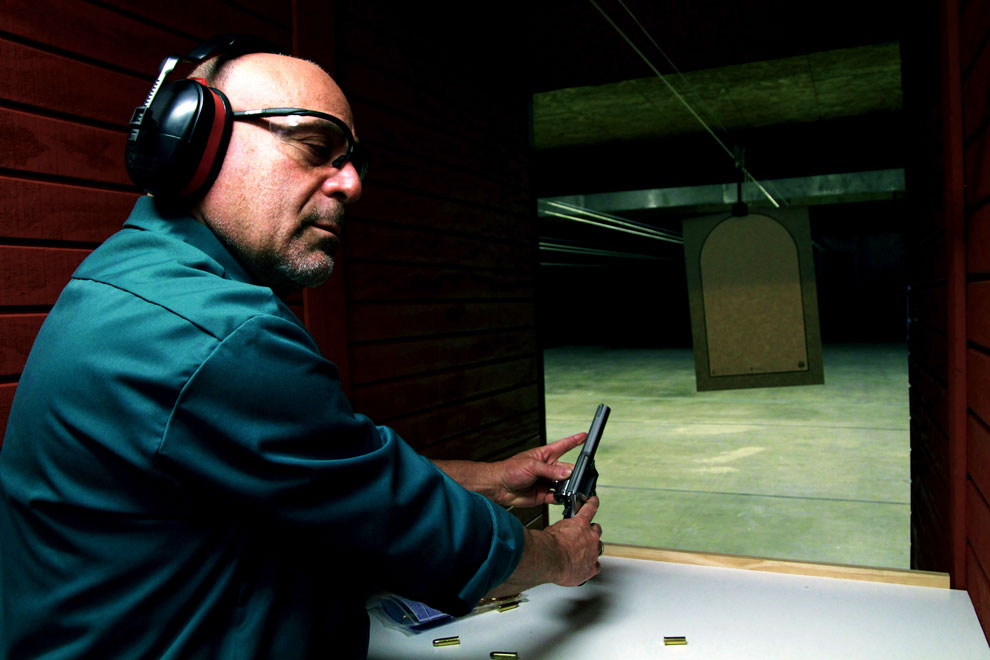 Steve Trager, owner of the Green Zone, demonstrates proper gun handling. "We come from the classroom. We spend a good couple of hours where we run through all of the safety rules. We practice. Our classes are interactive. I ask questions of you when I'm done," he said. Photo credit: Charlie Kaijo / Daily Sundial

After working many years as a high school teacher, Steve Trager used his pension to open a fully green, environmentally friendly firearms training center in Chatsworth called the Green Zone.

Trager was inspired to build this facility after he read an article on being green and innovative by his friend Tom Friedman. Trager came up with the idea of creating a green firing range, and incorporating his interest for martial arts and teaching into one business.

“At the time, I was a high school teacher for LAUSD and the idea of doing something like this in a green setting seemed to me like a winner of an idea and it is,” he said.

After three years of struggling to get through the system and spending more than he ever expected, the Green Zone officially opened on Jan. 28, making it the first indoor range in decades to be built in the area.

“It took all this time to get our doors open but everything you see is our own money,” he said. “This is my 20-year teacher’s pension you’re looking at. I put my money where my mouth is, as they say, and I’m very proud.”

The pride and joy of the Green Zone is their eight-lane shooting range. This range is unique in the fact that it is entirely handmade from an original design and is eco-friendly.

“Most ranges have two pieces of plastic on both sides and are maybe a couple feet (wide),” Trager said. “Our ranges are four-and-a-half feet in width and made from wood and steel. We also have a trolley retrieval system that ranges from easy to hard as you pull in your target because at the Green Zone the goal is to work your body. “

The ammunition is what makes the Green Zone green. The bullets are a copper-tin frangible, which means that they are meant to shatter on impact and turn to dust, creating no ricochet and leaving no poisonous lead fumes behind.

Trager said the projectiles are 95 percent copper with a slight tin input. There are two reasons the tin is used: first, it helps the copper shatter, and second, it adds a little weight to balance it out.

This type of ammunition technology has been around for 10 years and works extremely well, according to Trager. The only problem with it is not in the copper component but in the primers used.

“The lead-free primers we use have a shelf life of much less than lead, and they are sensitive to heat, cold and moisture,” he said. “(Because of this), we’re getting misfires on roughly seven to eight percent of our cartridges, but if you bring us the misfires we’ll give you two new cartridges that won’t. We understand that drawback, but it’s a reality to our business.”

Despite the setbacks of having misfires and primers with a shorter shelf life, Trager believes that the copper-tin alternative ammunition will be just as cost effective as traditional lead ammunition in the end.

The copper costs a few more dollars to begin with but the benefits are tremendous, according to Trager.

“This is a battle right here because most people are not used to spending a little more for ammunition,” he said. “The idea of being eco-friendly is not a popular concept. It’s a battle being green for us and we’re going to be hit hard because of that, but it’s the way to go for indoor shooting.”

In addition to the shooting range, the Green Zone offers security training, women’s self-defense and the ancient art of Chinese breathing and awareness known as Qi Gong.

Trager said that their women’s self-defense program is something special because they incorporate practical martial arts, firearm training and civic awareness.

“When it comes to women’s self-defense, I don’t believe you can teach a break away from someone who is determined to overpower someone with less strength and size,” he said. “Our approach is different (because) we spend time on communication, how to de-escalate and how to spot a problem before it becomes a problem.”

The Green Zone, according to Trager, offers quality programs in a place where all customers, including women, can feel comfortable and relaxed. To accomplish this, there is a Zen garden.

“The peace of a garden gives you the sense of training,” he said. “We wanted an atmosphere where everyone feels relaxed and comfortable, to take that pitch of aggression and make it smooth and fluid.”

In the end, Trager sees the Green Zone as a franchise concept, moving into communities as small range-style businesses that offer first response training to people. Trager envisions eventually seeing half a dozen Green Zones all over Los Angeles.

“There is an industry backlash on the concept of green and the bottom line is being the first of our kind, we have to cultivate our own audience and that will take time,” he said.