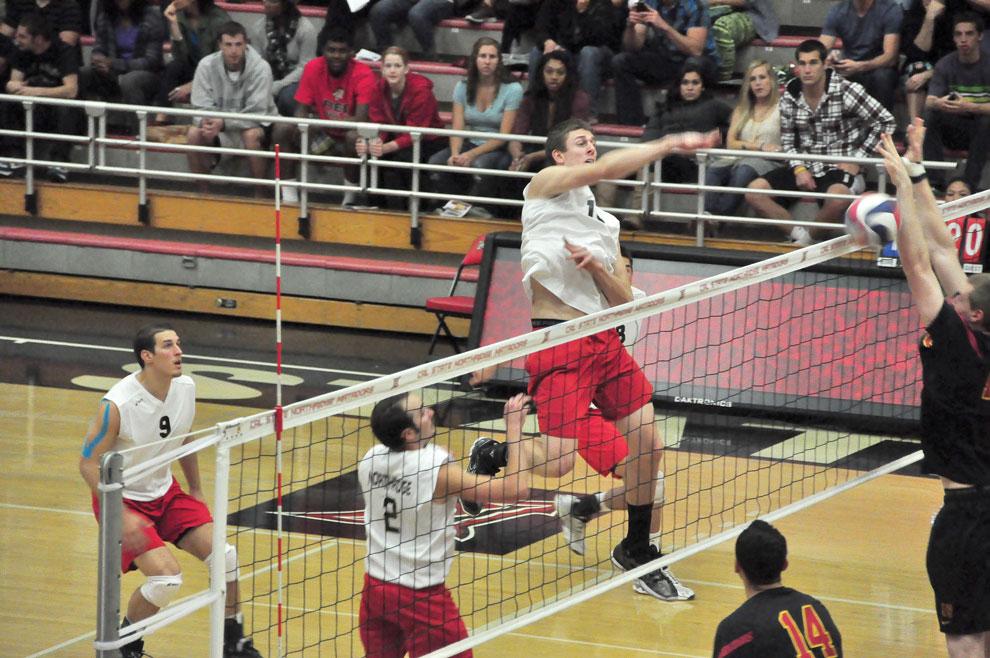 CSUN middle blocker Jared Moore goes for a kill against USC during the Matadors’ last regular-season game Saturday at the Matadome. CSUN will pay the Trojans a visit this Saturday for a MPSF playoff game. Photo Credit: Mariela Molina / Photo Editor

The No. 8 Matadors made it to the Mountain Pacific Sports Federation playoffs, but won’t have an easy time trying to get by No. 1 USC in the first round Saturday night at the Galen Center.

“It’s a lot bigger,” said middle blocker Jared Moore about the Galen Center, USC’s home. “A lot of the guys on our team don’t have as much experience there. Being there Friday to practice will be good for us.”

USC manhandled CSUN early in MPSF play with a straight-set sweep on Jan. 13 in the same venue where Trojan senior outside hitter Tony Ciarelli tallied 13 kills on .417 hitting.
Ciarelli outdid himself in the second meeting between the two at the Matadome and hit for a match-high 19 kills and a .818 hitting percentage.

The remainder of the USC offense was distributed between opposites Tanner Jansen and Maddison McKibbin.

Jansen exploded for 14 kills against CSUN in the first matchup while McKibbin was only second to Ciarelli in the second match with eight kills in USC’s 3-0 win at CSUN Saturday.

“We’re mainly focusing on stopping Tony Ciarelli,” outside hitter Brandon Lebrock said. “If we can stop him then we’ll be in pretty good shape.”

Northridge’s defense will have to work wonders to slow the USC offense, with middle blockers Drew Staker and Moore in the CSUN front lines.

Staker led the team with 106 total blocks this season while Moore had 103. The two combined for 22 solo blocks on the year, but will need to be mobile along the net against USC in order to slow its potent offense.

“We’re going to have to slow down their middles a little more,” Moore said. “We weren’t expecting them to be so effective. If I’m committing with the middles, I need to make sure that if they get the set then I get the block.”

As far as the CSUN offense goes, Lebrock and freshman Julius Hoefer will need to be on the same page if they expect to pull off the upset.

Lebrock has led the offense with 67 kills in the last four matches while Hoefer has struggled offensively with only 16 kills in his last three matches.

“I’m just going to keep swinging away,” Lebrock said. “I’ll keep calling for the ball, but I’m also going to help my teammates out when I’m in the back row with passing and hopefully we can get the win.”

Hoefer still holds the team lead in kills (280) despite playing in four fewer sets than Lebrock for the year.

“(Saturday) against USC, I did OK and I tried taking risks,” said Hoefer, who’s battled injuries this year. “We’re the underdog. We don’t have the pressure, so we can go for it.”

Fundamentals will also be key for CSUN to sneak by the Trojans and it will all start on the receiving side with libero, defensive specialist Charlie Condron.

The sophomore leads CSUN with 174 digs on the year and  his defense was key in the team’s late push to clinch the final seed.

“I just really need to watch where (Ciarelli) is,” Condron said. “There’s a lot of balls he doesn’t even hit. He just tips them around, so I need to be on my toes and be ready to hit some of those balls up.”

Near the net, senior Danny Rodrick would like to keep his final season as a Matador going. After not seeing much playing time through the first 12 games of the year, the setter has piled up a team-leading 543 assists this season.

“It’s a little scary,” Rodrick said about possibly playing in his last game as a Matador. “I’m just trying to go out there and make the best of it.”