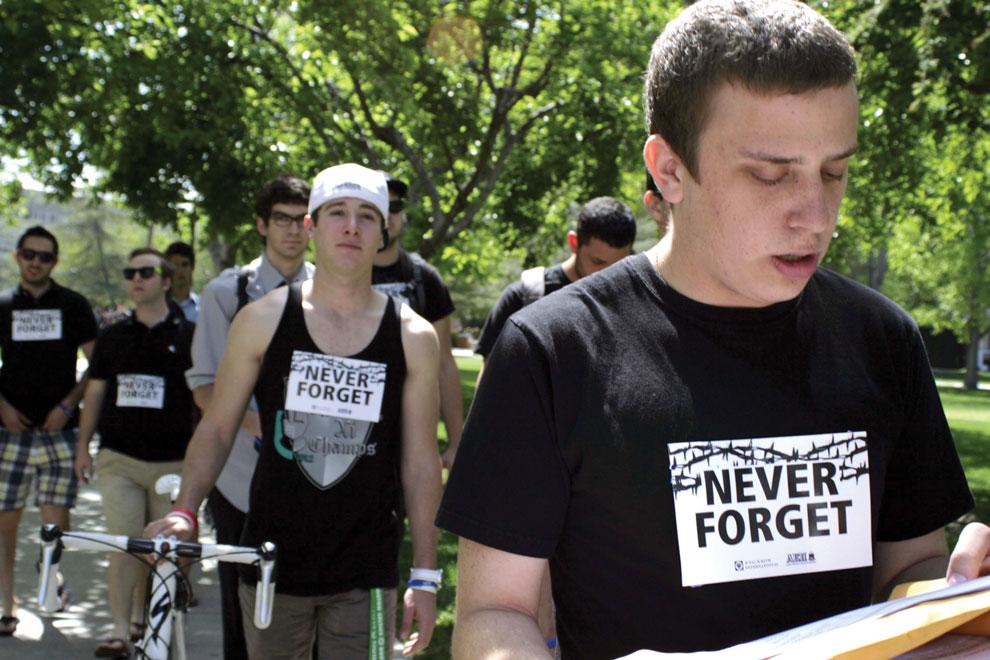 We Walk to Remember was organized by Josh Blank, a freshman pre-CTVA major from the AEÎ Fraternity. They walked around CSUN on Thursday, to remember those lost in the Holocaust. Photo credit: Farah Yacoub / Daily Sundial

Meeting near CSUN’s B3 parking structure, the group made their way to the student union and back down Matador Walk, many wearing black as a symbol of mourning.   Josh Blank, walk leader and freshman pre-cinema and television arts major, chose to focus on the children of the holocaust by reading names from a list of child victims while the other participants quietly followed.

“It’s a good way to commemorate the Holocaust,” said Blank about the event.  “When we say ‘never forget,’ we mean it.  We want to let the community know we’re here.”

Blank traveled to Poland last year where he visited Majdanek, a former Nazi death camp.  Visiting the gas chambers at the camp changed him forever, and in part inspired him to be a leader in events such as this one, he said.

“I saw the evil of man,” Blank said about the camp.  “But I also saw the triumph of man.  There is good in the world, and does triumph over evil.”

The ceremonial march culminated with a moment of silence in near Oviatt Library.

Yom HaShoah coincides with the Hebrew calendar’s 27th day of Nisan, the anniversary of the Warsaw ghetto uprising against Nazi military in Poland during World War II, according to the United State Holocaust Memorial Museum website.

“We honor the memory of six million innocent men, women and children who were sent to their deaths simply because of their Jewish faith,” said President Barak Obama in a written statement, Thursday.  “We stand in awe of those who fought back, in the ghettos and in the camps, against overwhelming odds.”

This year is marks the 70th anniversary of the uprising by the western calendar.

An observance of Yom HaShoah was held at Sinai Temple on Wilshire Boulevard, Wednesday, and another is scheduled to be at the Los Angeles Museum of the Holocaust near Beverly Hills, Sunday.