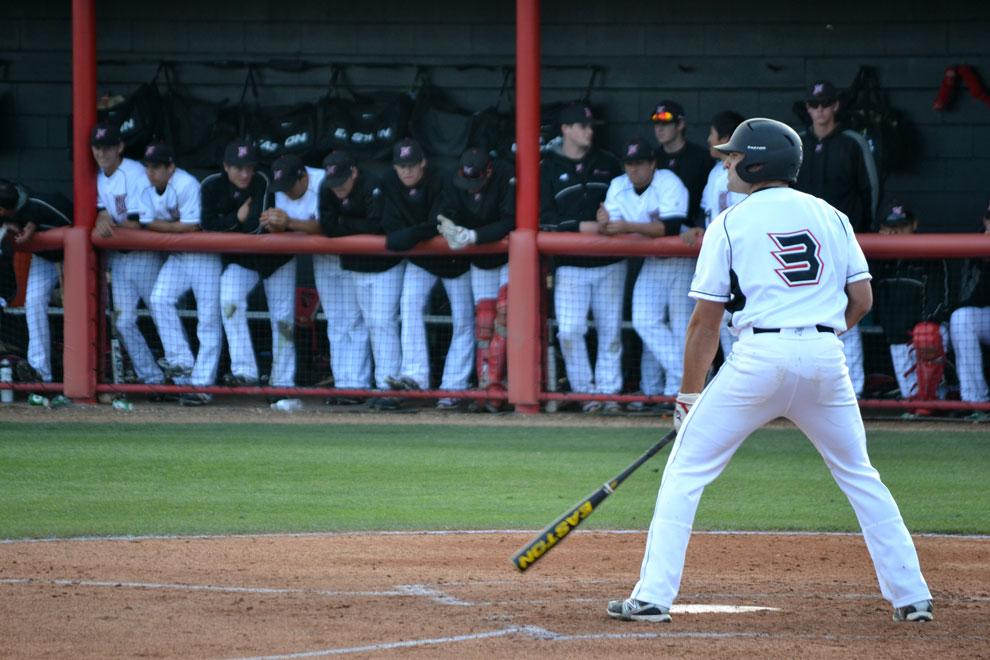 CSUN first baseman Cal Vogelsang gets ready for his at-bat during a game against Cal Poly on April 14 at Matador Field. The Matadors play Cal State Bakersfield for the second time this season today in non-conference action. Photo credit: Mariela Molina / Photo Editor

CSUN outdueled CSU Bakersfield in the first meeting between the two on Apr. 10 and have another chance today to prove that the walk-off win wasn’t a fluke.

In the first matchup, the Matadors (16-20) narrowly came away with a victory over the Roadrunners (18-18) after a Ryan Raslowsky grounder was mishandled by the CSUB shortstop, allowing CSUN to score the winning run.

This time around, Northridge will have sophomore Harley Holt on the mound to start while CSUB will start junior Scott Brattvet.

Holt is 0-2 this season and will make his first start of the year after mostly seeing playing time out of the bullpen. The righty has given up 22 hits in 20.1 innings and struck out 10 with a 3.10 ERA.

Brattvet is 4-3 for the Roadrunners and will be making his ninth start of the season wielding a 3.92 ERA.

In the first meeting, Northridge jumped to a 3-0 lead in the first inning off a three-run blast by junior Miles Williams, but couldn’t stave off a CSUB comeback in the following innings.

The Roadrunners chipped away at the lead with runs in the second and fifth before evening up the game at 3-3 with a pair of ninth-inning doubles.

CSUN senior Steven Keller doubled to start off the bottom ninth, followed by a single from junior Nate Ring. The next two batters couldn’t bring home the run for Northridge, but Raslowsky’s chopper to short brought home pinch-runner Chester Pak.

The Matadors were last seen in action last Tuesday at UCLA to face the team that had embarrassed them in their home opener on Feb. 21 in a 19-7 romping.

Northridge exchanged runs with the Bruins early, but a seven-run seventh inning put UCLA up for good.

The Matadors committed five errors on defense while their bats tallied 11 hits on the day.

Williams went hitless against the Bruins and left three runners on base dropping his batting average to .263 this season.

Williams has been the power supply for CSUN up to this point in the season with five home runs and a .414 slugging percentage while Vogelsang continues to hit for average in the two spot of the Matador lineup.

Vogelsang hit safely three times and scored once against the Roadrunners the first time around.

Freshman third baseman Michael Livingston has found his swing at the plate after seeing some struggles at the dish early on since replacing junior Brett Balkan at the hot corner.

Livingston has gathered five hits in his last three games with a double and a run scored.

After today, the Matadors will return to Big West Conference action with a three-game home series against  Long Beach State.

Northridge has won three of its last four Big West games, including a series win over Cal Poly two weekends ago.