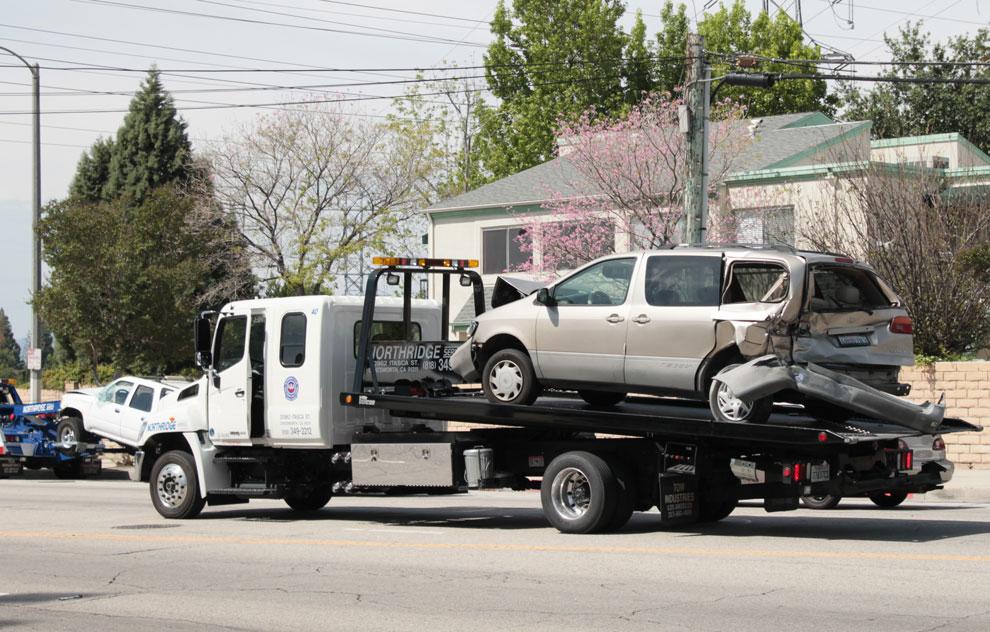 A van is being taken away after being heavily damaged in a three car accident. The accident occured between Lassen Street and Reseda Boulevard yesterday before noon. Photo credit: Jeffrey Zide/ Daily Sundial

A vehicle overturned and a woman was rushed to the hospital after three cars collided near the southbound intersection of Reseda Boulevard and Lassen Street at 9:30 a.m.

Frank Lopez, the driver of a Toyota 4Runner involved in the accident, said the minivan driving in front of him unexpectedly collided with a gray Volvo. Lopez said he didn’t have time to swerve and overturned after crashing into the vehicle.

“I’ve never been in an accident before,” said Lopez who was driving home. “It all happened so quickly, and now I’m still kind of in a daze.”

Lopez did not suffer from any injuries, but the woman in the first impacted vehicle was addressed by paramedics and transported by an ambulance.

“I was sitting in my house and heard a big bang,” said Javier C., 24, CSUN business administration major. “When I came out to see what happened, there was glass everywhere and they were trying to get the woman out of the car.”

Oil spilled across the road, according to police officer Sarah Faden. Traffic units closed off the left lane and clean up was promptly tended to.

The cause of the accident and the condition of the hospitalized driver is still unknown.