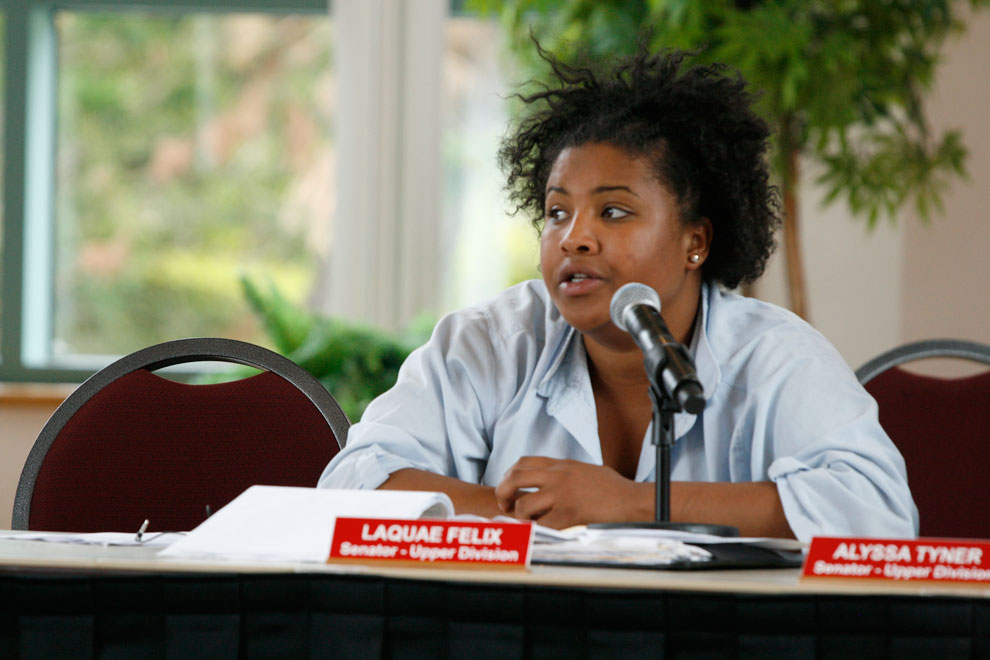 Student Body Senator Laquae Felix, 20, journalism major discusses the funding for black graduation committee on Tuesday at the Grand Salon. Felix said "If you don't give them the money they need it won't be as special, this is their day." Photo credit: Loren Townsley / Contributor

Associated Students voted to distribute an additional $1,700, a decrease from an original request of $3,000, to Black Graduation Celebration, Tuesday after the issue had been tabled last week.The 2011-2012 annual A.S. budget allocated $3,500 to the Black Graduation Committee; but the group came back to the senate with a budget amendment requesting an additional $3,000.

“Let’s at least do the bare minimum amount they’ve requested for the event to operate,” Senator Laguae Feleix said.

Senator Cinzia Lettieri expressed her opposition to the additional funding beyond public safety and NCOD costs.

“This is an event for leisure, like ice hockey. They’ve paid $2,000 for commemorative program books, sound should have been planned first,” she said.

Senator William Ryder explained the ideological paradoxes at odds in the Grand Salon, “There are two schools of thoughts on this. I don’t think it’s ever been anyone’s intention to not want an event or group to function.”

The funding is determined by a per student cost basis, and according to this model, Black Graduation Committee had already maxed out their funding.

“It’s disappointing we couldn’t give them everything they needed to function and they have to seek funding from their representatives,” Feleix said.

The four decade-long CSUN celebration has been granted less and less money over recent years; the 2009-2010 A.S. budget gave the group $4,500. The ceremony is voluntary for graduating African American students and provides a smaller, intimate graduation to celebrate with the community.