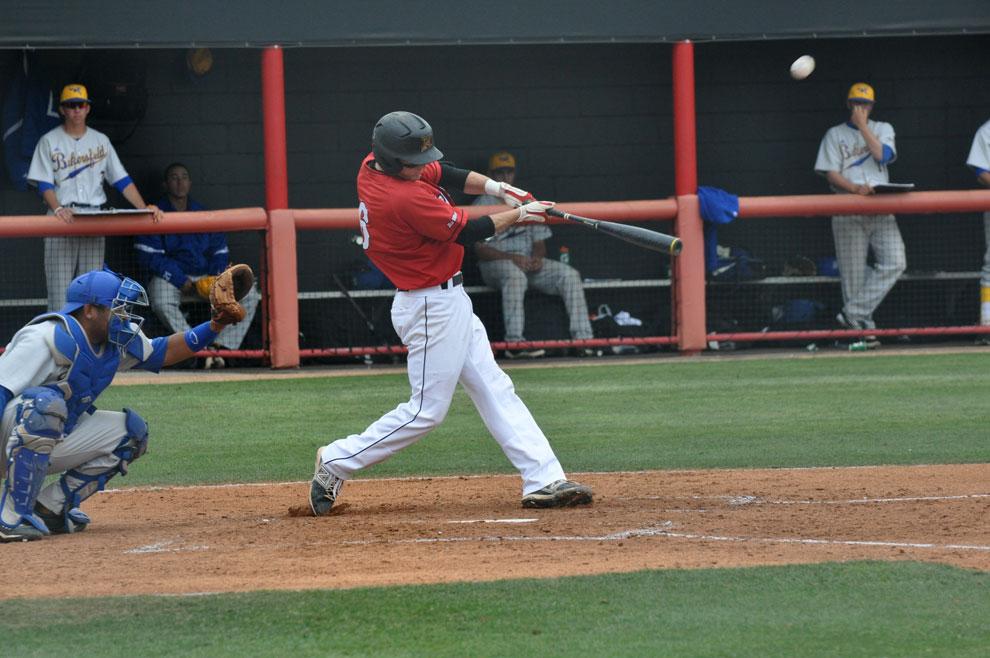 The Matador bats came out swinging and hit three home runs, but defense was the unsung hero of Tuesday afternoon’s 5-2 victory over Cal State Bakersfield at Matador Field.

Matador Harley Holt faced off against Scott Brattvet in what appeared to be a pitcher’s duel at the beginning. In the top of the first, Holt got two quick outs before the Roadrunners began sprinting and scored a run with a mix of singles and walks. That was the only score Holt gave up, going three strong innings and only allowing the one run off four hits.

Though Holt looked like he had enough to go deep into the game, CSUN manager Matt Curtis chose to treat the outing as a warm-up game.

“Because it was a midweek game, we planned on splitting it up between pitchers to save them for the weekend games,” Curtis said.

Splitting the game up between pitchers worked out perfectly. Brandon Warner relieved Holt in the top of the fourth, and pitched 2.1 solid innings. Warner only gave up three hits, one of them a home run to left field which was inches from foul territory.

Although both of the first two pitchers gave convincing performances, it was Jerry Keel who came in after Warner and got the win for the Matadors. Keel kept Bakersfield scoreless in 1.2 innings, dropping his ERA to 1.95. Louis Cohen came in for the last two innings, barely giving up a hit and getting the save for the Matadors.

The defense behind the pitchers was nothing but excellent as well. Committing zero errors out in the field compared to Bakersfield’s one really helped keep Northridge in the game until they sprinted past the tiring Roadrunners.

On the offensive side, the Matadors started off slow, stranding six runners on base in the first two innings. But, as the clouds moved in over the field, the Matador bats came booming out like thunder. In the fourth, Marty Bowen led off the inning with a powerful home run over the left field fence. Bowen ended up going 3-for-4 with an RBI and running in two scores for the Matadors.

“It felt good to hit that home run because I was robbed of one a couple games ago,” Bowen said. “I was seeing the ball well and getting pitches up in the zone, which was nice.”

Bowen’s homer was followed up by another one in the same inning: a towering shot over the left field by shortstop Kyle Attl as CSUN took a 2-1 lead.

The Matadors made great connection with the ball on the day, hitting just about everything with power. Steven Keller joined in the deep-ball fun with another left-field home run in the bottom of the sixth. Later on in the same inning, after two singles and a double, the Matadors scored two more runs for the final 5-2 cushion.

“Coming off of a bye week, it took a couple of innings for our bats to really wake up,” Curtis said. “We may have simply just needed to see the pitcher one time around, but eventually we got on track and the long ball really helped us out today.”