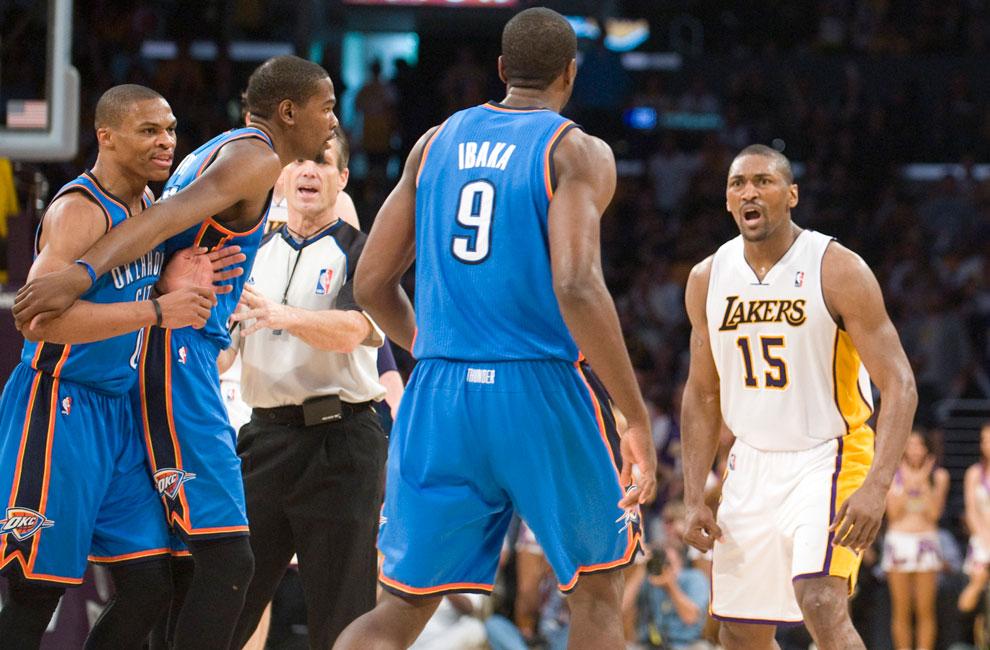 The Lakers’ Metta World Peace (15) prepares to defend himself against the Thunder after he delivered an elbow to the head of guard James Harden at the Staples Center Sunday. World Peace was ejected on the play and received a seven-game suspension from the NBA on Tuesday. The Lakers should consider themselves lucky that he’s not gone for the entire playoffs. Courtesy of MCT

How many advocates of world peace can you name that have viciously struck a colleague in their professional setting?

Hopefully, the answer is only one: Metta World Peace.

Or should I revert back to calling him Ron Artest? Because his latest act of world peace, which had him hitting Oklahoma City’s shooting guard James Harden square in the head Sunday afternoon during the second quarter of the Lakers’ double-overtime victory, wiped away everything he’s done so far to fix his tarnished reputation.

The apologies, the charities, the psychiatric help, the name change – all gone.

Ladies and gentlemen, Ron Artest is back. And all it took was a moment of overwhelming emotion.

With 1:37 left in the first half, Artest cut the Thunder’s lead to one with a thunderous dunk. On his way back on defense, Harden had the misfortune of slightly bumping into Artest, whose response was to immediately swing his elbow all the way around – slamming Harden on the side of his head, causing him to suffer a concussion he hasn’t recovered from yet.

After the game, Artest had this to say:

“I got really emotional, really excited. And it was unfortunate that James had to get hit with the unintentional elbow,” Artest said. “I hope he’s OK. The Thunder, they’re playing for a championship this year. So I really hope he’s OK, and I apologize to the Thunder and to James Harden.

“Such a great game, and it was unfortunate so much emotion was going on at that time.”

This “apology” simply isn’t good enough. Not for fans, not for Harden and certainly not for the NBA.

The league handed Artest a seven-game suspension Tuesday. He will miss the Lakers’ season finale at Sacramento and possibly the entire first round of the playoffs, unless it drags on for seven games.

As a diehard fan of the Lakers, it pains me to say this, but even though Artest sitting out games (coupled with Matt Barnes’ sprained ankle and Devin Ebanks’ weightlifting injury to his hand) puts the Lakers in grave danger as they’d have no starting-caliber small forward, seven games is nowhere near enough. It isn’t enough for brutally injuring another player, especially with Artest’s lengthy rap sheet.

He should be forced to miss the playoffs. His actions not only hurt the Lakers’ championship aspirations, but also the Thunder’s. Harden still hasn’t been cleared to play, and with the playoffs starting this weekend, he may miss part of the first round or even more.

Over the past three years, Artest has worked extremely hard to make people forget his unbelievable outbursts in the past: from pulling down Paul Pierce’s pants in the middle of a game, to in-your-face confrontations with then-rival Kobe Bryant, to the brawl in the Palace at Auburn Hills where he, Jermaine O’Neal and Stephen Jackson beat up on fans after one of them threw a beer at Artest.

To repair his reputation, Artest seeked help to keep his emotions in control, had key game-saving moments in a championship run against the Boston Celtics in 2010 and sold his only championship ring to donate the money he got to charity. Unfortunately, all this was for naught – he screwed the Lakers over by reverting to his old self and is unworthy of the name “Metta World Peace.”