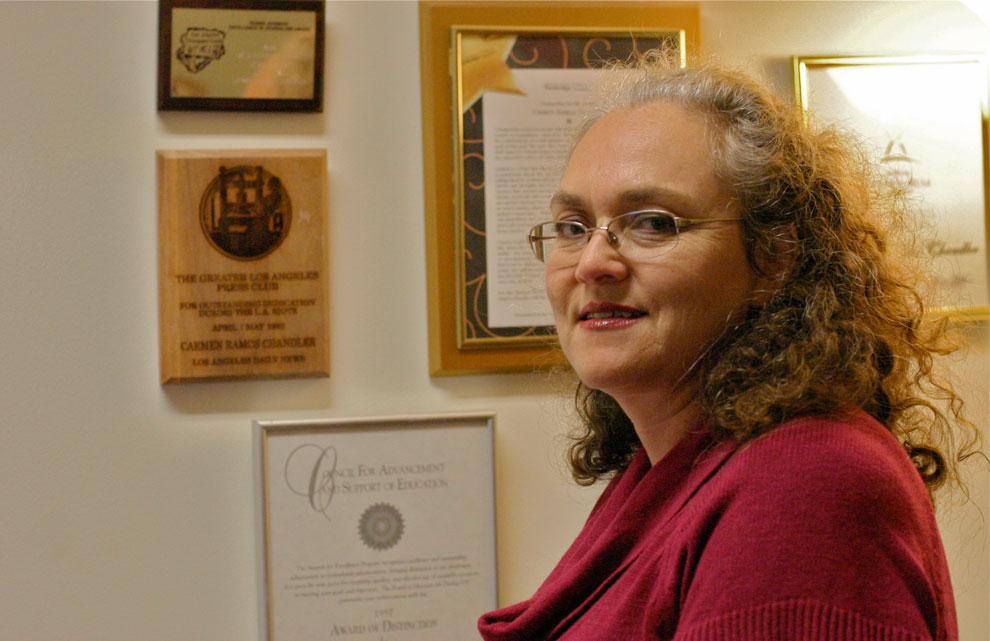 Carmen Ramos Chandler, CSUN director of news and information, stands in her office next to her Greater Los Angeles Press Club Award, for which she was recognized for her outstanding coverage as a reporter for the Los Angeles Daily News during the 1992 Los Angeles riots. Photo credit: Trisha Sprouse / Daily Sundial

Carmen Ramos Chandler stood on a hill overlooking Vermont Avenue and the 101 freeway when she peered out to see her city in ruins.

“The sun was shining bright orange through a layer of mystic fog and smoke that engulfed the city,” she said. “I was in awe, Los Angeles looked apocalyptic.”

Chandler, CSUN director of news and information, was a reporter for the Daily News when the L.A. Riots occurred.

What she saw left her speechless.

As Chandler attempted to navigate through major streets and interview victims of violence, she said a feeling of desperation crept in the air and she was taken aback by the sight of a small child encircled by a frenzy of looters.

“He was about 8 or 9 years old and he entered a ransacked store to steal a lip pencil makeup display. Why would he want that? That just goes to show how restless he felt to be involved.”

Chandler was also stunned by the sight of a Hispanic woman being “chewed out” by a police officer for stealing a package of diapers. The woman’s hands were forced in plastic ties, Chandler said, and she bowed her head in shame as the officer yelled “You’re a mother,” in broken Spanish.

“The look on her face,” Chandler said. “That’s something that really sticks with me.”

On more than one occasion during this assignment, Chandler’s life was in danger.

At one point, Chandler overheard a group of Latinos shouting “Sniper, sniper,” because they thought there was a sniper perched on a rooftop trying to shoot down at rioters.

Amid the day’s chaos, Chandler’s co-worker, photojournalist, David Sprague was bashed in the head by rioters and rushed to the emergency room. Chandler travelled with photojournalist David Crane to retrieve Sprague’s car in Vernon, where she faced a gang of men out for blood.

“We pulled up at a stoplight and through the rear-view mirror we could see a group of gang members approaching the car. We floored it, but had we not, we could have been severely hurt.”

Chandler said though L.A. was immersed in violence, she also witnessed acts of community kindness. She said throughout the day firefighters were heavily understaffed and she came across a group of residents coming together to help them lift a hose and put out flames.

“I think it’s important to note that there’s two sides to every story,” Chandler said. “People also came together and put themselves in danger to help one another.”

Chandler said the faces she saw that day still stay with her and covering the L.A. Riots is an experience she’ll never forget.

“I was completely overwhelmed. I remember coming home, going straight to the shower and weeping in the corner.”