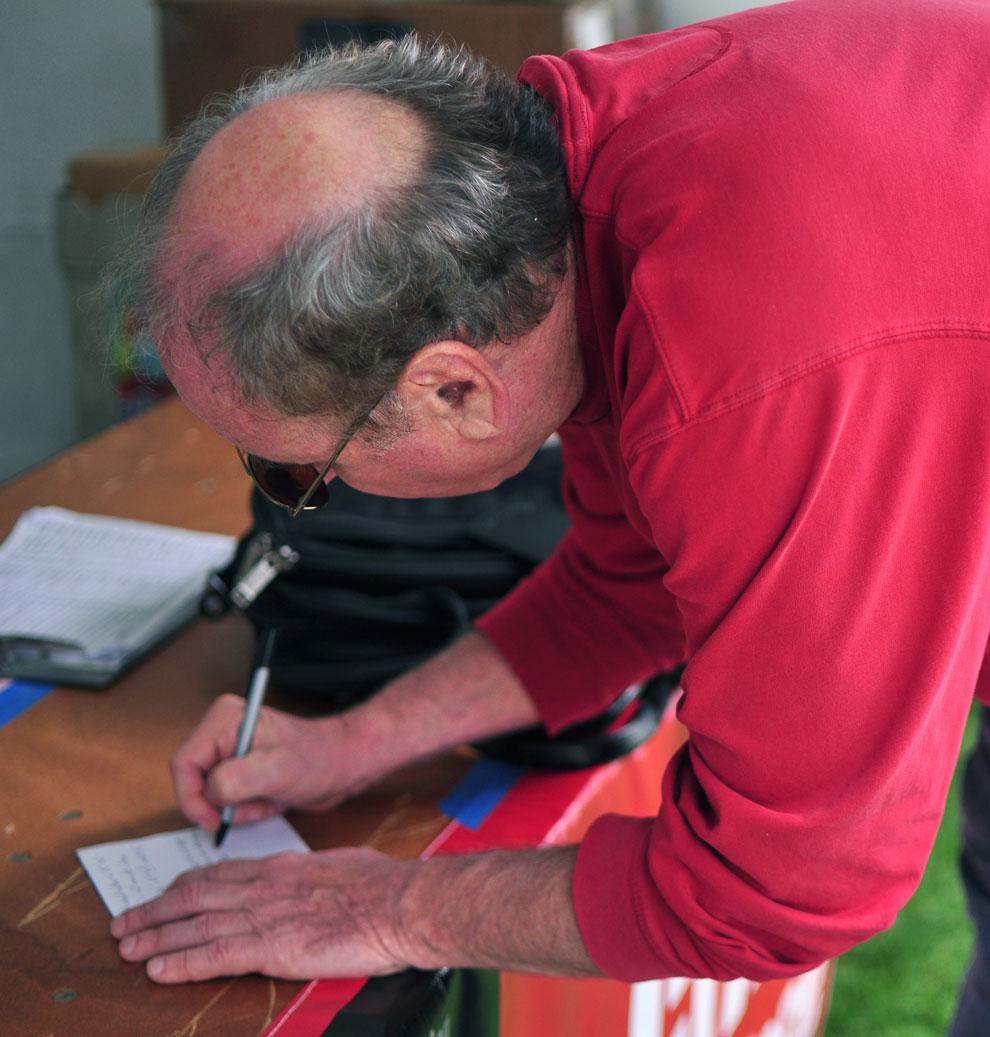 Art Shulman writes on his ballot before casting it into the California Faculty Association ballot box at the voting booths on April 24. Photo credit: Michael Cheng / Daily Sundial

Adjuncts, also typically categorized as “lecturers,” are temporarily appointed faculty not tenured to the institutions at which they teach. Their jobs hinge on budget availability and class enrollment. They are paid by the course, and may or may not receive benefits depending on the number of classes they teach.

“As the budget starts to erode, and we have less class sections, the first to lose their jobs are lecturers or adjuncts, because they are part-time and temporary personnel,” said Nate Thomas, CSUN chapter president of the California Faculty Association.

The association is a union that represents 23,000 professors, lecturers, librarians, counselors and coaches in the California State University system, according to its website.

Faculty in the Cal State system are currently working under a contract that expired 22 months ago. Members of the association would like to maintain the same terms and conditions in the expired June 2010 contract, but Thomas said a new proposed contract would cut benefits, increase the number of students in each class, and require faculty to pay more for parking.

“What they’re doing is using a bad economy to dish out a bad contract for us and using this crisis to diminish the power of the faculty,” he said.

In addition to their contract status, faculty have not received a raise in four years, Thomas said.

As a result, members of the association have been voting on a two-day rolling strike, which if approved, would take place in the fall throughout the 23 Cal State campuses.

While different types of teachers are represented in the California Faculty Association, each group has varying levels of compensation and job security.

Instructors at universities are generally classified into one of three categories: tenured faculty, tenure-track faculty and lecturers.

Tenured faculty are essentially guaranteed permanent employment and typically teach a 15-unit course load. Twelve of these units are taught in classrooms, and they serve on committees, complete community service and advise students to meet the remaining three units.

Tenure-track faculty are full-time instructors who are on the way to becoming tenured, and do so by performing community service and academic research during a six-year probationary period.

Leslie Bryan is a lecturer in the theater arts department at Cal State San Bernardino, which follows a quarter system. Every 10 weeks, she faces the possibility of losing her job.

Bryan has taught at San Bernardino for 14 years, and remains non-tenured at the university. She also teaches a class in San Bernardino’s humanities department because she is teaching one theater class less than she normally does.

Like tenured faculty, lecturers are considered full-time with a course load of 15 units, which on average comes out to five classes. They also hold office hours, but are not required to serve on committees or perform community service like tenured and tenure-track faculty.

Elizabeth Hoffman, an English teacher at Cal State Long Beach, is a lecturer and a member of the California Faculty Association’s bargaining committee. She also previously served as the organization’s associate vice president.

Hoffman said the hardest aspect about her teaching status is the job uncertainty, but because lecturers are paid less, they are a cheaper option for the administration.

“It’s very hard to get a full-time load of five classes,” she said.

For this reason, lecturers may pick up classes at other campuses to make ends meet.

“Students don’t need faculty running between campuses. Instead of having one person divide their work up between three campuses, why not have more permanent faculty?” she said.

While picking up another class in another department has enabled Bryan to pay rent, it would still be easier for her to focus on one area, she said.

Still, even with the continuous cuts to the Cal State University system and uncertainty she faces as a lecturer, Bryan is passionate about her job.

“I love working with students. I’m going to stay there as long as I can,” she said.