Obama’s healthcare plan is on the chopping block, and liberals are to blame 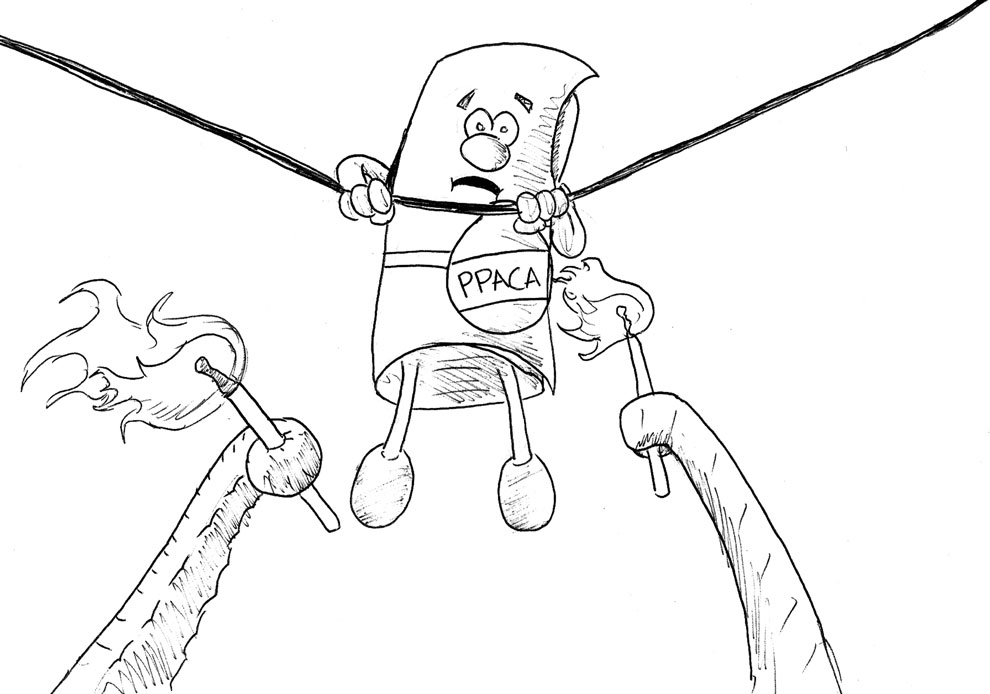 I present here a cautionary tale of how the misguided choices of liberal voters in the 2000 presidential election may have cost us the ability to purchase affordable health insurance after we finish college.

Last month, the Supreme court heard oral arguments challenging the constitutionality of parts of the Patient Protection and Affordable Care Act (PPACA), or “Obamacare.”  They are expected to render a decision this summer.

This is particularly troubling for those of us getting degrees in departments where many of our post-graduation jobs will be freelance and not provide us with health care.

Our political system can seem dysfunctional because of partisan gridlock; we may wonder if it really matters who is president. But presidents make decisions that have consequences affecting our lives far into the future.

I once heard a historian say a great leader is a good leader who faced an extraordinary crisis and rose to the occasion. He noted that, so far, our country has been lucky to have good leaders in a time of crisis — George Washington, Abraham Lincoln and Franklin Roosevelt, for example.

On the morning of Sept. 11, 2001, these words came to haunt me as I listened to a radio broadcast describing the World Trade Center Towers crumbling to the ground. I felt a sickness in the pit of my stomach, thinking of how George W. Bush would handle this crisis. I said to myself: “We’re Doomed.”

I thought of all of my liberal friends who voted for Ralph Nader instead of Al Gore in the 2000 election.

They said our government was so broken that it didn’t matter whether a democrat or a republican was president. We needed to vote for the Green Party’s Nader to send a message to those in power, they said. I suggested it was important to vote for Gore because the next president might fill vacancies on the Supreme Court. My friends argued that who sits on the Supreme Court isn’t important.

Although I agreed with most of Nader’s positions, I knew he had no chance of being elected. I thought casting my ballot for Nader would be throwing my vote away. My friends thought voting for the lesser of two evils instead of someone I really believed in was a cynical choice.

Gore lost Florida and its 25 electors to Bush by 537 votes. More than 97,000 Floridians voted for Ralph Nader. A 2006 study by faculty from Dartmouth College and UCLA came to the conclusion that liberal Florida voters who chose to vote for Ralph Nader instead of Gore,  likely cost Gore the election.

I had to watch the Bush Administration’s deceitful and mismanaged invasion of Iraq, with its terrible human and economic costs, while they dropped the ball in Afghanistan. I had to watch an incompetent Bush appointee bungle the Hurricane Katrina response. I watched Bush’s tax cuts and war spending leave us with a huge budget deficit by the time the 2008 economic crisis hit, just when we really could have used the money.

The PPACA may not be perfect, but it offers the promise of affordable healthcare for the 44 million Americans who have no health insurance, including freelancers, the self-employed and those with pre-existing conditions. The law mandates that Americans without health insurance, purchase it by 2015 or face a tax penalty. However, it offers subsidies to make coverage affordable, and prohibits insurance companies from denying coverage, or charging more to people with pre-existing conditions.

I share my perspective on the 2000 presidential election, because I overheard students on this campus before the 2008 election saying they weren’t “going to bother voting,”  because “it doesn’t matter who wins.” They may rightfully be cynical about politicians. They may have felt that voting is simply voting for the lesser of two evils.

I often wonder what would have happened if liberal voters who voted for Nader in 2000 had voted for Gore instead. Our national debt might be much smaller, we probably would have avoided the Iraq war debacle and we might have a liberal-majority Supreme Court more likely to let the affordable health care act stand.

If this summer we learn the Supreme Court has invalidated our best chance for affordable health care in the future, consider voting for the lesser of two evils. Sometimes, it makes all the difference in the world.