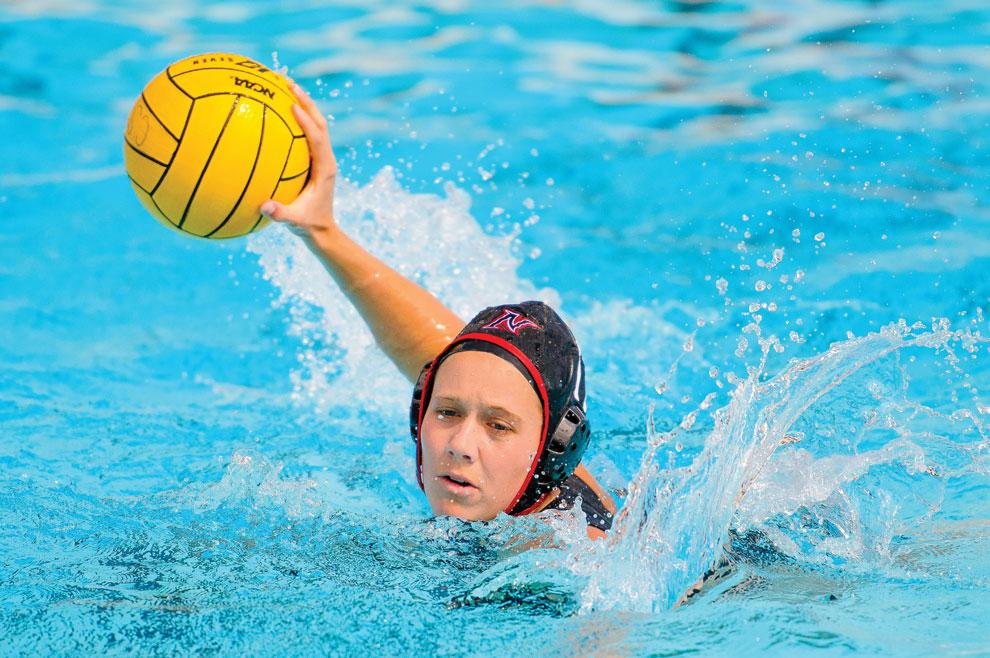 CSUN utility player Jenny Jamison looks for a goal in a game. Jamison and the Matadors head to UC Davis on Friday to face Long Beach State in the first round of the Big West Conference Tournament. Photo courtesy of CSUN Athletics

After ending the season strong with two wins and big performances from their offense Sunday, the Matadors (17-19, 1-4 Big West) head to UC Davis for the Big West Conference Tournament and face Long Beach State (11-16, 1-4) in the first round Friday.

“Everybody had an opportunity to play in the last two games,” Matador head coach Dr. Marcelo Leonardi said. “Offensively, we had the best production we’ve had all year, which is really critical heading into the Big West.”

Unlike other sports in the conference that have a round-robin-styled season, playing each other multiple times, the water polo season was relatively short, having only lasted five games. Northridge clinched the No. 4 spot despite only winning one game in the conference.

Still, CSUN finished its season with 36 total games under its belt, the most by any Big West team. In comparison, top-seeded UC Irvine played only 28 games, but there’s a reason the Matadors played more games.

“This year we played more because of how young we were and I needed to get more games and more experience for those younger players to finally be able to peak at the right time,” Leonardi said.

Fatigue could be an issue as CSUN has played more than its conference opponents, but Leonardi has confidence in his young squad.

“There might be some wear-and-tear, but because we’re so young, we’ve been able to develop our bench and our depth as well,” he said.

Having already defeated them on April 1, 11-7, CSUN will get a second look at the 49ers Friday. Leonardi’s team feels confident heading into the match.

“We always do a really good job of breaking down film and really focusing on each team individually,” two-meter defender Heidi Pettinger said. “We’re really prepared as a whole and we know what to expect. Even if they change it up, we’ll still be prepared.”

Utility player Jenny Jamison, who has a team-high 67 goals this season, will be looking to lead CSUN offensively. Though the sophomore has scored the most, she credits the team’s defense for sparking her offense.

“If we don’t play good defense, then our offense will struggle,” Jamison said. “We have to focus on our defense first and I think the offense will just come naturally.”

The Matadors had limited exposure to their Big West opponents, and with Long Beach being the first on their list, they will have to repeat what they did in their first meeting if they want to continue through the tournament.

Should the Matadors get past the 49ers, they’ll face UC Irvine the next day. Overcome that and they’ll be in the championship game Sunday.

“We have to come out with the same intensity because (the 49ers have a really physical press … and if we can get past that, just like we did when we played them last time, then we’ll be fine,” Jamison said.