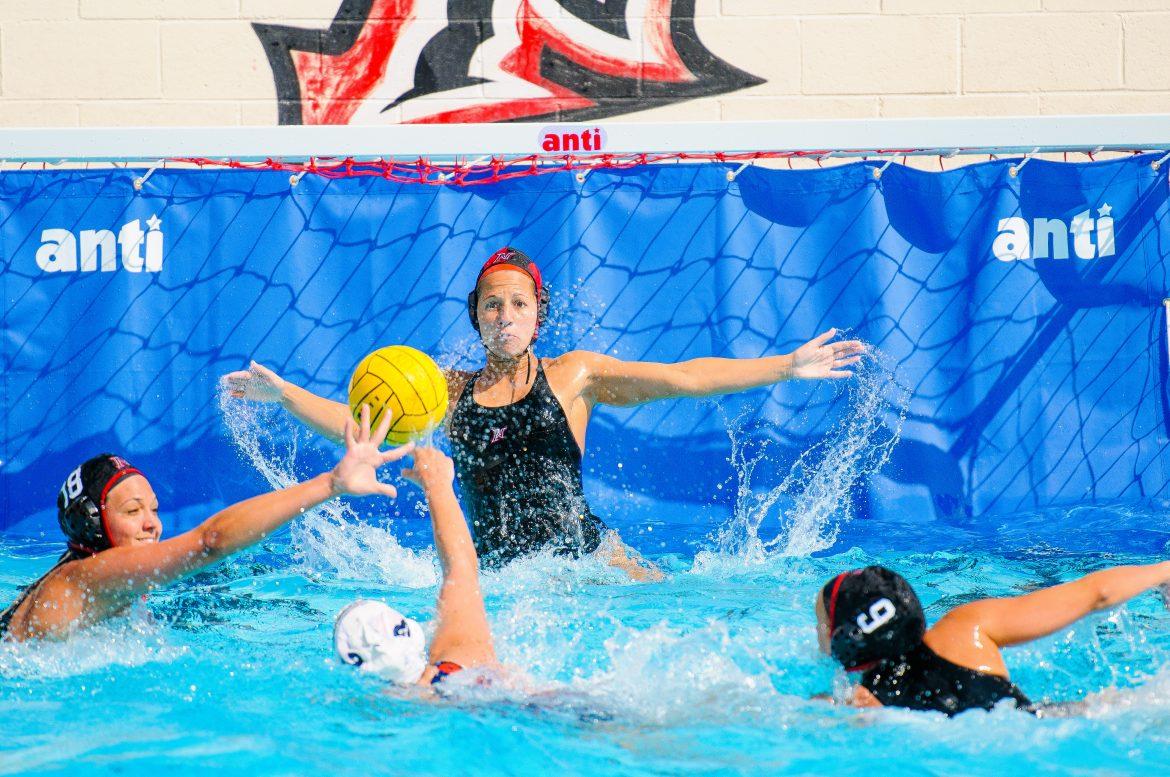 CSUN goalkeeper Dana Harvery protects her net during a game. Harvey only tallied four saves in the Matadors' loss to UC Irvine in the semi-finals of the Big West Conference Tournament Saturday afternoon.Courtesy of CSUN CSUN Athletics.

They came back and got the double-overtime win against Long Beach State the previous day to continue through the tournament, but the Matadors’ hopes at the Big West Conference Tournament title ended Saturday afternoon as they went down to top-seeded UC Irvine 8-3 at Schaal Aquatics Center.

Though it was served a loss by the Anteaters, CSUN (18-20) still has a chance for third place in the tournament on Sunday against UC Santa Barbara.

Leonardi said in the previous game that his team created 6-on-5 opportunities which led to their win against the 49ers. But the script flipped on them, with the power plays coming in UCI’s favor.

“They capitalized (on power plays). They drew 12 exclusions and went 5-of-12,” Leonardi said. “I think the difference in the game was power plays and we lost to a very good team.”

Exclusions came early for Northridge, with Kelcie Ferreira picking up her first one just 22 seconds into the game. Though the Anteaters picked up 10 exclusions of their own, the Matadors only scored on one of those opportunities.

“Our offense was good enough to produce power play opportunities, but unfortunately our execution on 6-on-5 wasn’t there today,” Leonardi said.

UCI’s execution on power plays was on key, however. After CSUN’s first exclusion with 7:38 left in the first quarter, utility player Danielle Warde gave the Anteaters the 1-0 lead just three seconds after the penalty.

From there, Irvine would score three more goals for the first quarter while the Matadors would only score one, thanks to the Anteater all-around play.

“(UCI’s) physicality took us out of our game and their execution on 6-on-5,” Leonardi said. “Our 5-on-6 (defense) is very good and they found a way to score. They went five for 12 where most teams shoot below 30 percent. A lot of it had to do with defensive breakdowns and our goalie being able to make stops.”

Senior goalkeeper Dana Harvey had a rough outing, only picking up four saves, which wasn’t the production Leonardi would have liked from her, he said.

Now the Matadors play for third place, which won’t come easy having to go up against No. 3 UC Santa Barbara Sunday afternoon.

Leonardi noted that his team hasn’t won on a Sunday, but he is not letting this deter his squad from making a run.

“This is an opportunity to get a first and coming back and letting our seniors leave this program with a win,” Leonardi said.