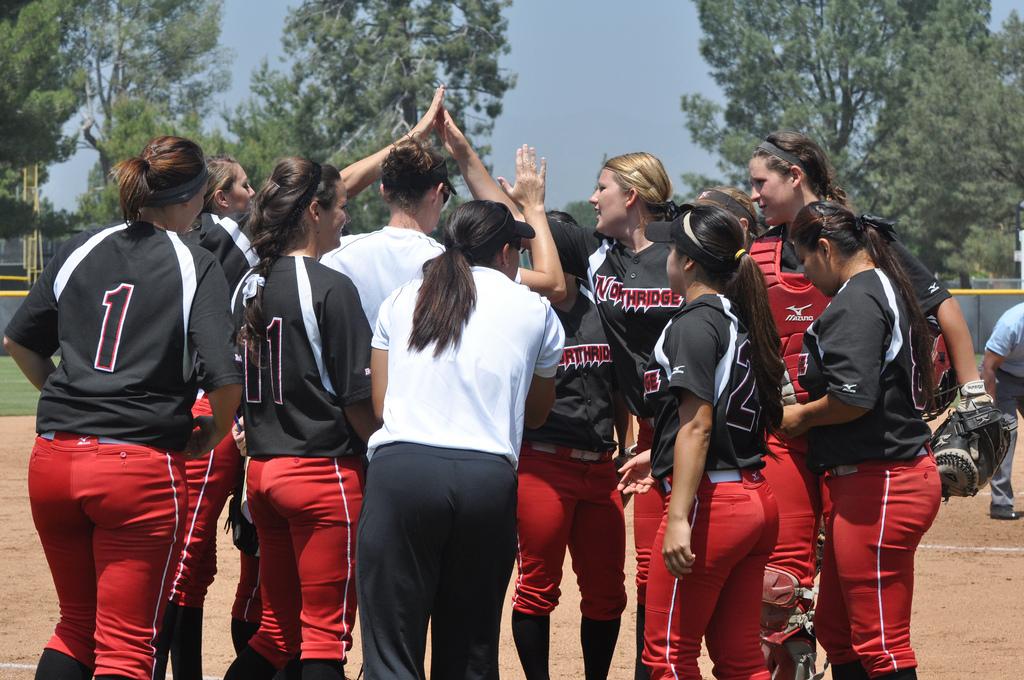 Three years into her career at CSUN, pitcher Mia Pagano had yet to do what she did Saturday to get a 5-2 win against the Titans.

Getting relieved at the end of the sixth inning after having all but gift-wrapped the first game of a doubleheader at Matador Diamond moments before, Pagano had to go back in to close her own game.

“When I was younger,” said Pagano when asked if she’d ever gone back into a game after giving way to a closer.

Pagano had pitched a two-hit shutout and the Matadors led Fullerton 5-0 going into the seventh. With Pagano’s eighth win of the season needing only collection, CSUN coach Tairia Flowers turned the game over to reliever Brianna Elder.

Elder walked the first Titan batter and gave up a home run to the second. Back in came Pagano.

The junior got a double play to leave Fullerton with only one out, but then she hit a batter and gave up consecutive singles to load the bases as the home crowd began to get antsy. What was supposed to be a “let’s just get this over with” final inning had quickly turned into an “oh no” frame.

“The fans got a little scared,” Pagano said of the jam.

Pagano put an end to the anxiety by getting CSUF second baseman Adriana Martinez to chop a grounder and throwing the last out at home plate to preserve a win that felt like one and a half.

“She threw some great pitches,” Flowers said of Pagano, who ended up conceding five hits and no runs with three strikeouts. “She kept (the Titans) off speed and off balance.”

Pagano wasn’t on the mound for Game 2, which CSUN lost 7-2, however.

After getting off to a 2-0 lead following Mikayla Thielges’ seventh home run of the season, CSUN looked poised to get the day sweep. But two costly mistakes might have set up the path for seven unanswered Fullerton runs thereafter.

The Matadors spotted the Titans two unearned runs in the fourth to tie the score. With runners at the corners, Fullerton pinch runner Emily Vizcarra was pump-faked out of third by Thielges. Vizcarra got home after Thielges’ off-throw to third landed in foul territory.

Game 2 CSUN starting pitcher Shelly Tait threw an illegal pitch in the very next play, allowing Jena Rubio – who had made it to third on the prior error – to walk in the tying run.

And the Titans continued to pour it on.

While the Titans’ tying runs weren’t earned, their winning ones sure were. Two solo home runs in the sixth, which sent Tait to the bench, and a three-run shot in the seventh left the Matadors in a similar situation to that of Fullerton in Game 1: a five-run deficit (7-2) with only three outs left.

There were no scares this time around. The game ended shortly after.

The Matadors combined for 14 hits on the day and committed two errors in each of the games. Alyssa Ray and Madeline Sale each had two RBI in Game 1.

After the lengthy afternoon, Pagano could be seen walking with a protective boot in her right leg. Her day having gone longer than she hoped for, it was time for a break before coming back Sunday for Game 3.

If she didn’t know before, she knows now Flowers can call upon her at any time. Literally.