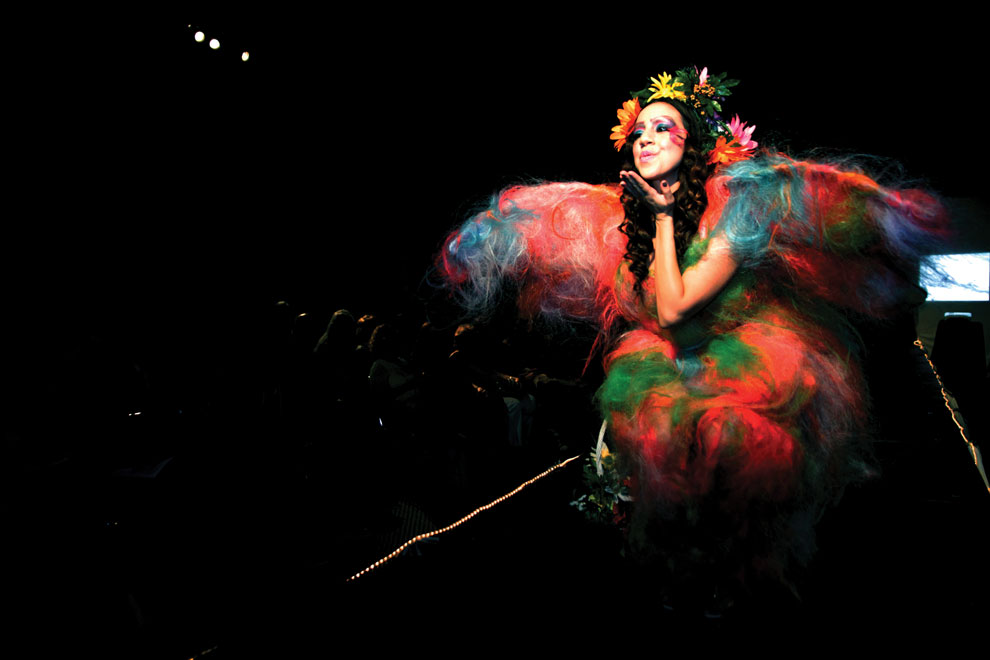 The show attracted over 75 students, faculty and community members.

The inspiration behind this year’s theme was meant to allow designers to express themselves without restraint, said Kimberly Reamer, 23, co-director of the show and senior majoring in apparel and merchandising.

Sixteen student designers showcased their collections consisting of four or more garments, all of which were inspired by their creative visions and imagination.  Designers sent voluminous rainbow mesh skirts, feather dresses and blouses made of can tabs down the runway to encompass the spirit of Cirque de la Mode.

Designer Brenna Hoffman, 23, who won third place for her contemporary sportswear collection, SCHTEKRA, said the inspiration for the first piece came from her broken fruit bowl.

“I decided to make it into a dress and from there I took all of my dresses and had them focused around feminine and sexy style mixed with glass,” Hoffman said.

Consistent with the theme, designer Ting Lin took on a more futuristic and architectural approach with her collection, Edgy Dimension, using galactic-like plastic skirts and a silver, orange and black color palette.

Akane Shimizu won first place for her special occasion dress collection, titled A Drag. The focal point of her collection was Tokyo’s edgy fashion and L.A.’s silver screens, according to the collection description. Included in her line were Madonna-like bustiers, Lady Gaga inspired glasses and fairy wings.

Former CSUN student, Marisa Fellman, 24, who majored in theatre arts, said she was “shocked by how complete and intricate the designs were.”

“We run this like a real live high production fashion show, it’s not just like a college fashion show. It’s the real deal. It’s the mimic of something you would see at New York fashion week,” she said.

Leon emphasized the importance collaborating with other students in order to produce the show.