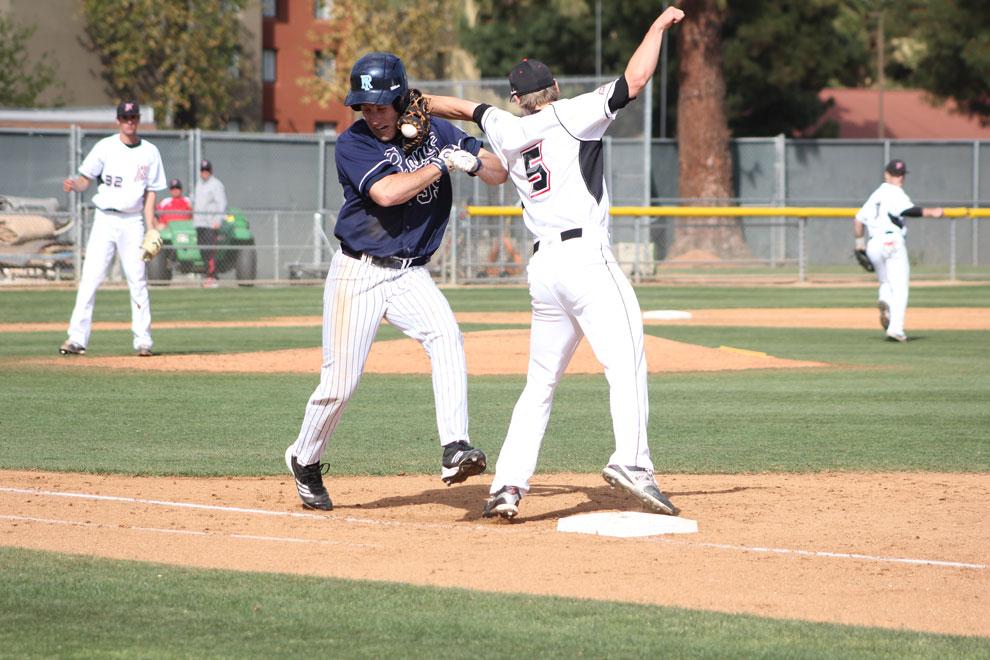 CSUN infielder Tommy Simis injures his left arm during a game against Rhode Island on March 13. Out since the injury, Simis is finally cleared to play. Photo credit: Michael Cheng / Daily Sundial

Since conference play started, the Matador offense has kept up with what the best the Big West Conference has to offer.

After a series win over then-ranked Cal Poly and only needing one big inning to take the series from Long Beach State, CSUN is in the hunt for post-season play.

Last season, the Matadors (18-22, 5-7 Big West) only mustered up a 6-18 conference record in head coach Matt Curtis’ inaugural season and are only two wins away from surpassing that mark with 12 conference matches left to do so.
Big West Update

CSUN has already faced the three teams that sit atop the Big West in Cal State Fullerton, Long Beach State and Cal Poly and have the chance to make a push in the latter stages of conference play.
CSUN sits in sixth place of the nine teams in the conference and has three of its last four opponents behind it in the current standings.

The play of junior Cal Vogelsang and freshman Ryan Raslowsky at the top of the order mixed with the recent power surge of junior Kyle Attl gives CSUN the chance to put up runs.

Vogelsang is currently on a six-game hit streak, his second longest hit streak since his 12-game streak that spanned Mar. 14 to April 3. In the two spot, Vogelsang has hit .301 and has managed a .327 on base percentage.

Raslowsky has maintained a .319 OBP in the leadoff role, including 10 walks, and leads all Matadors in at-bats in Big West play with 53 visits to the plate.

Attl has homered twice in Big West play and four times this season leading to 19 RBI in 2012. The shortstop has paced the CSUN offense with eight of his RBIs in conference play alone.

Usual power-bat Miles Williams has seen a drop off in production but has still had his hand in some Matador victories. More recently, the junior outfielder drove a ball off the outfield wall against Long Beach State that scored Vogelsang in the ninth and extended the game into extra innings. CSUN would go on to win the game in the 12th.

Williams is still slugging .396 in Big West play with an OBP of .358 but has only homered once in conference, taking his season total to five.
Injury Update

Transfer Junior Brett Balkan saw his first action since April 3 in the 12-3 loss to Long Beach State on Sunday. Balkan came in at shortstop and committed one of CSUN’s two errors on the day.

The third baseman has been plagued with a series of minor injuries and was replaced by freshman Michael Livingston at the hot corner for the 11 games that he missed.

Redshirt junior Tommy Simis has recovered from his arm injury caused in a collision on a play at first base in the 5-4 loss to Rhode Island on Mar. 13.

Simis saw his first action since the injury at second base after he replaced Raslowsky in the Matadors 5-2 win over CSU Bakersfield.