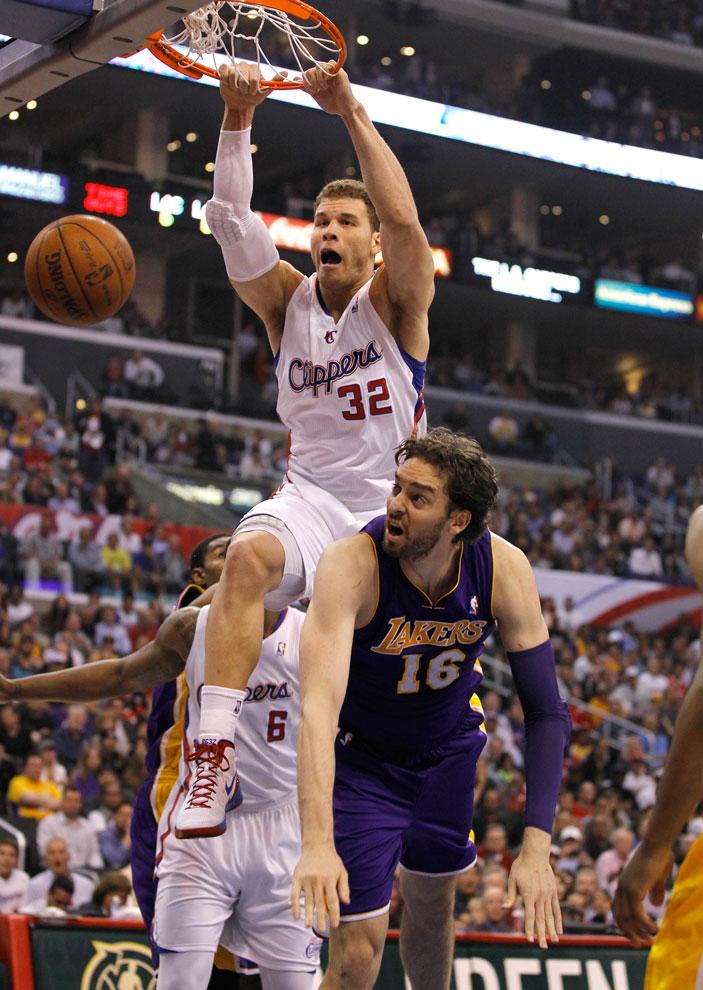 Clippers forward Blake Griffin slams home a basket over Lakers forward Pau Gasol on April 4. The Clippers came back from a 27-point deficit to win Game 1 of their first round playoff series against Memphis, and that didn’t sit well with some Laker fans. Courtesy of MCT.

Haters. Sports inevitably have them. Where there are people rooting for a team or player, there are even more rooting against it or him.

Because he screwed Cleveland. Because he never comes through in crunch time. Because he has no rings. Because of his hair line. Whatever.

Laker fans have taken on the task of celebrating any LeBron failure as if it was a second job. It’s understandable, actually. They don’t want the topic of “who’s greater, LeBron or Kobe?” to have any ground for discussion, and it won’t until LeBron wins a title.

More on the side of difficult to comprehend, though: hating on the Clippers.

They’re the other NBA team in town, the little brother you share an arena with, the ones who “stole” Chris Paul. When Lakers and Clippers meet each other, there’s a slight rivalry. Especially this year in which the Clippers are more than decent.

No one expects Laker fans to start cheering for them, but going to the other side of the spectrum and hating on them? C’mon, man. That should be reserved for Miami or Boston.

Sunday night made it clear just how much Laker fans dislike the other L.A. team. The Clippers, looking all but dead down 24 with 9:12 left in Game 1 of their Western Conference series against the Grizzlies, came back to win 99-98, much to the dismay of Laker fans?

Earlier in the day, the Lakers had their own extraordinary moment when center Andrew Bynum tied an all-time NBA playoff record with 10 blocks, part of a triple-double performance in a Game 1 win against Denver. But then the Clippers did the unthinkable at Memphis and the Laker win could only play second fiddle to that.

I mean, people are still trying to figure how the Clippers pulled that off. That was the most un-Clipper-like thing ever. It was only the 12th Clipper playoff win in NBA history.

But after radio sports shows and social networks were full of people that had no business caring about the first meaningful thing the Clippers ever did in the postseason reacting as if they were Grizzlies fans.
Laker fans.

At first upset at the poor-shooting Clippers for embarrassing the city, Laker fans turned their focus to trivializing the moment once Lob City came back to win, making the once-smug Memphians want bags over their heads.

The hometown’s rep wasn’t important anymore. Instead, everything from “the Grizzlies just gave it away” to “the Clippers will probably hang a banner for that win” filled the airwaves.

It was as if the Lakers had lost. But no, it was just the rarest of Clipper playoff wins. The Lakers have 400-plus wins of the kind. But do you really have to bring that up on a night that’s about THEM?

Not unless you’re a tool. That’s like seeing someone just got a new toy and then rushing back into your house to bring out your bigger, better toy to show off. Why not let them have their moment? The Clippers will never catch up to the Lakers in accomplishments. Or are Laker fans actually worried about that?

Clipper fans: be happy with your comeback. And also with the reaction from Laker fans. It’s a sign of respect, even of slight fear. They can deny it all they want, but they’re watching their backs for Lob City. With that being said, don’t get carried away and start talking smack to them.

Lakers fans: you can be better than that. Clipper success does not equal Laker failure. Congratulate your little brother on his once-in-a-lifetime win and move on. A Clipper fan will never be able to argue his franchise is better. You will always have 16 reasons to throw in his face if needed.

Instead, aim your passionate dislike at the Heat or the Spurs, teams that will likely still be playing once your 2012 offseason starts.