California Faculty Association votes in favor of strike in fall 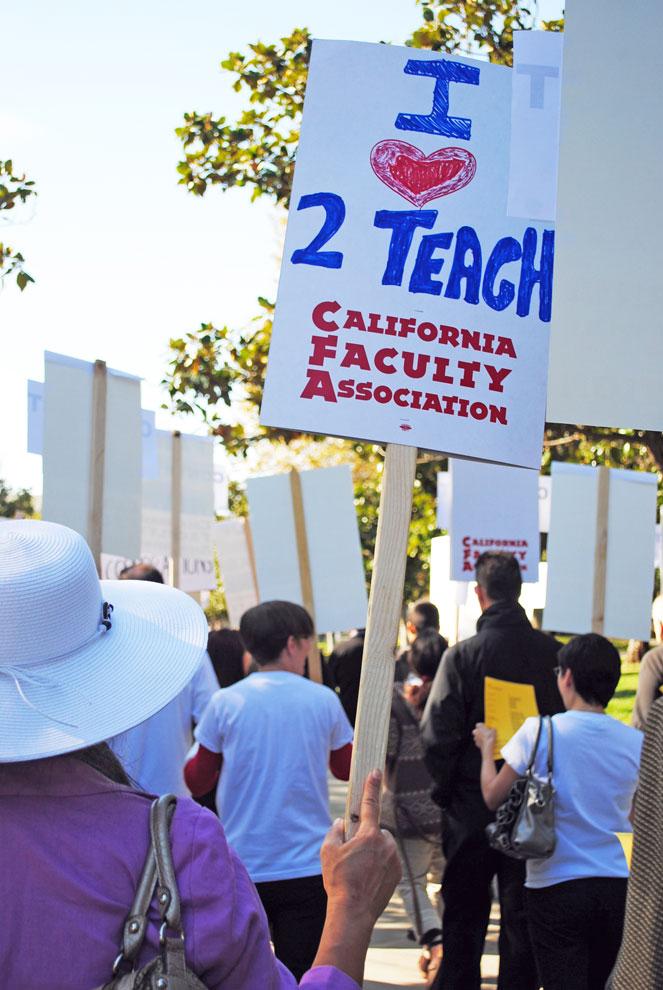 On November 8, faculty and students gathered on campus to participate in the CFA informational pickett event. Sundial File Photo

Faculty across all 23 CSU campuses have approved a statewide strike if their demands for a new collective bargaining agreement after 22 months of not having one aren’t met.

The results of the voting period, which lasted from April 16-27, came in yesterday at noon when Lillian Taiz, president of the California Faculty Association (CFA), announced in a teleconference that 95 percent of the 8,750 faculty members who voted affirmed the motion to strike.

The work stoppages will come into effect next fall in the form of two-day “rolling strikes” if a final meeting with the CSU fails, said Andy Merrifield, associate vice president and bargaining team member of the CFA.

“We don’t have a clear timetable, but we’re going to have a sit down with management, and if it’s necessary, we’ll be going through a fact-finding process,” Merrifield said.

The main demands of the CFA, according to Merrifield, are issues regarding workload, compensation and academic freedom, among many others.

The CFA still maintains the position that they’re offering fair proposals to the CSU, according to Merrifield.

“We’re still demanding a 1 percent general service increase over three years, which we find reasonable,” Merrifield said. “It’s been a difficult and disappointing process. We didn’t want this fight, we offered modest proposals.”

However, a recent fact sheet released by the CSU claims the CFA’s proposals would cost the CSU $504.1 million more over the life of the agreement in salaries and tenure track hiring.

Taiz stressed the importance of solidarity between faculty members and students throughout this situation.

“We believe in our students, and the students and faculty are in this together,” Taiz said. “Both have been slammed by the CSU – students by rising tuition and faculty by furloughs and lay-offs. Students get ignored by the CSU and are being used as ATM machines.”

Merrifield insists a new contract will allow teachers to better accommodate the needs of students.

Taiz once again reiterated the CFA’s stance that the CSU has been slowly transforming into a for-profit organization.

“We’re seeing a very disturbing trend accross campuses,” Taiz said. “As students pay more, they can’t get into classes, so they’re forced to pay extra for extended education for a course they need to graduate.”
“Our message to Reed is clear,” she added. “We just want to provide quality higher education to the students.”