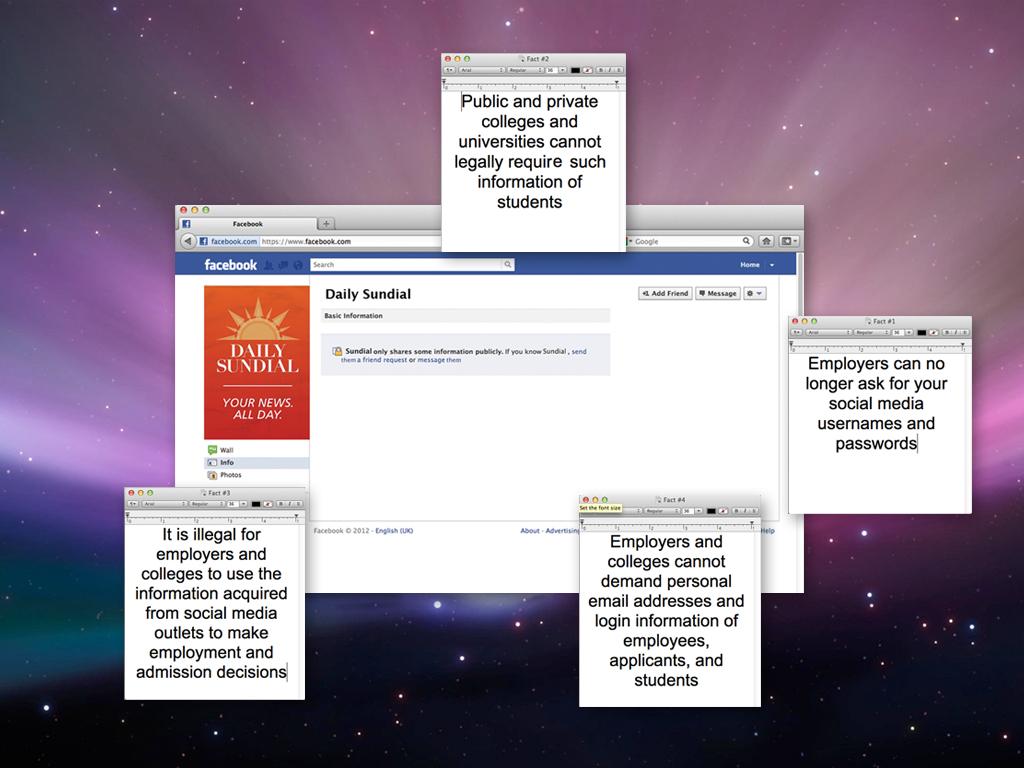 The California Senate Labor and Industrial Relations Committee approved the Social Media Privacy Act on April 25, in an attempt to stop public and private universities and colleges from asking students for their social media information.

The committee approved the legislation in a 5-0 vote.

Under the legislation, authored by state Sen. Leland Yee, (D-San Francisco), employers will also be prohibited from asking employees for their social media information.

“Your private life should be kept separate from your professional life,” said Patriccia Ordoñez, 21, a senior majoring in sociology, about employers turning to social media for personal information.

“If you’re not supposed to discuss your personal matters at work, why should they be used against you when you’re applying for a job?” Ordoñez added.

In a news release, Yee said it is illegal for employers and colleges to use the information acquired from social media outlets to make employment and admission decisions.

“(It) has absolutely no bearing on a person’s ability to do their job or be successful in the classroom,” said Yee in the news release.
The bill came about after several news agencies and civil rights organizations reported that numerous businesses, public agencies and post-secondary institutions were asking workers and students for their Facebook and Twitter account information.

Sydney Delville, 18, a freshman majoring in political science, said she encountered the question of social media accounts when she was filling out an application to a fast-food restaurant.

“There can be assumptions and insinuations about anything on Facebook, and employers can misinterpret that,” Delville said. “Sometimes, I say things out of anger, and they could assume it pertains to them.”

Delville, however, is not opposed to institutions or companies, public or private, asking applicants to see their social media accounts.
“It depends on the position they are applying for,” she said. “If you’re applying to a CEO position or to be the president of CSUN, I would like to see what you do in your personal life.”

Employers that don’t  formally ask for this information use other measures to access employees’ social media accounts, such as asking the person to login during an interview while the interviewer looks over the person’s shoulder. There is also asking prospective employees to “friend” human resources managers.

“I remember an accountant from my orthodontist once asked me how my three jobs were going,” said Ana Phomthirath, 24, CTVA senior. “I never told her I had three jobs. The only way she could have found that out is by reading the comments on my Facebook.”

The Senate Committee on Education also approved the bill April 24 in a 7-0 vote.