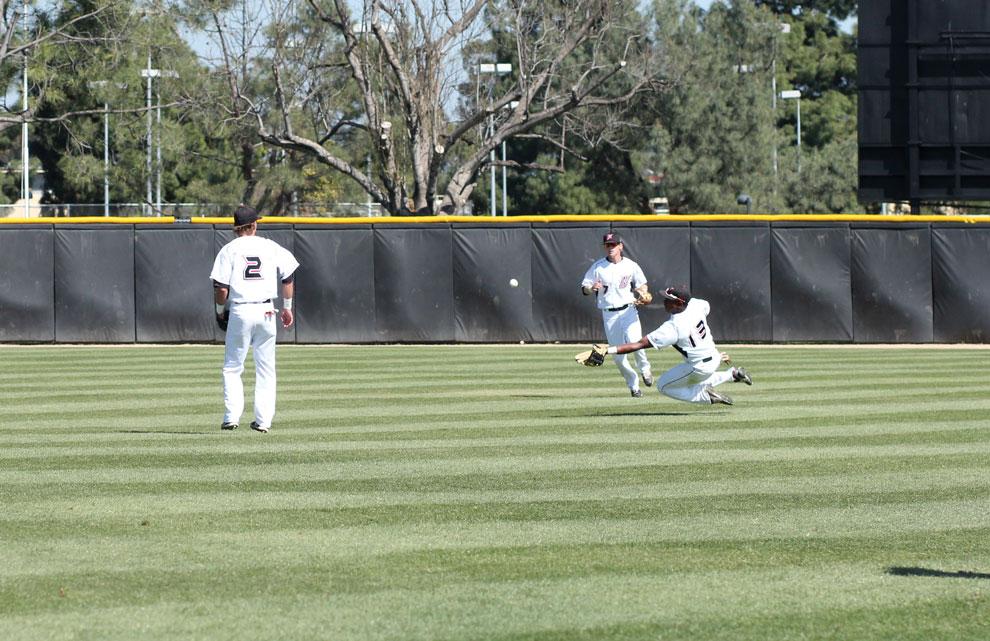 CSUN outfielder Miles Williams dives for a catch in a game against CSU Bakersfield on April 10. The Matadors travel to Riverside to start their series with the Highlanders. Photo credit: Blake Gayton / Contributor

The Matadors have to like their chances heading into a series against a team that’s ranked lower than they are in the Big West Conference.

Northridge (18-22, 5-7 Big West) has already faced the top four ranked teams in the conference and will next face the seventh-ranked UC Riverside (14-24, 4-8) this weekend at Cunningham Stadium.

The Matadors have avoided sweeps against all the top teams so far this season and even stole the series against third-ranked Cal Poly.
CSUN currently sits at sixth in conference with three of its remaining four series against teams currently behind it in the Big West race.

That’s not to say that the Highlanders can’t push ahead of the Matadors this weekend.

Riverside comes into the weekend dead last in the conference in batting average and hits but is ranked third in on-base percentage.
In its last conference action, UCR was swept by UC Irvine on the road.

The Highlanders’ senior infielder Vince Gonzalez has paced the UCR offense so far this season and leads the team in batting average (.350), hits (50) and runs batted in (18) while no one on the rest of the roster is hitting above .300.

Riverside’s pitchers have better numbers in the stat books than CSUN and have the ability to minimize the number of runs opposing teams can put up on the board.

UCR has two pitchers with four wins apiece in Eddie Orozco and Dylan Stuart, but have also combined for 11 losses. Orozco leads the Highlanders with a 2.30 ERA while Stuart’s ERA continues to hover at 4.96.

Although UCR’s numbers show it hardly ever comes out on top, CSUN will need to find a way to get on base if it wants to earn its second Big West series victory of the season.

Transfer Cal Vogelsang comes into the weekend on a six-game hitting streak and ranks fourth on the team in batting average at .301.
Junior Nate Ring also has a .301 batting average in 103 plate appearances and leads the team in stolen bases with six.

If these two continue to reach base safely, sophomore Miles Williams and junior Kyle Attl could potentially bring these base runners home.

CSUN is only two conference wins away from surpassing its 2011 total but will need to see solid pitching from its staff if it plans on overcoming that mark this weekend.

Junior Alex Muren put up five innings of two-run baseball against Long Beach last week before leaving the game with the bases loaded in what turned out to be a four-run sixth inning for the Dirtbags.

Freshman Jerry Keel turned in another stellar outing against the Dirtbags in Saturday’s matchup, pitching seven innings while allowing one run and scattering seven hits.