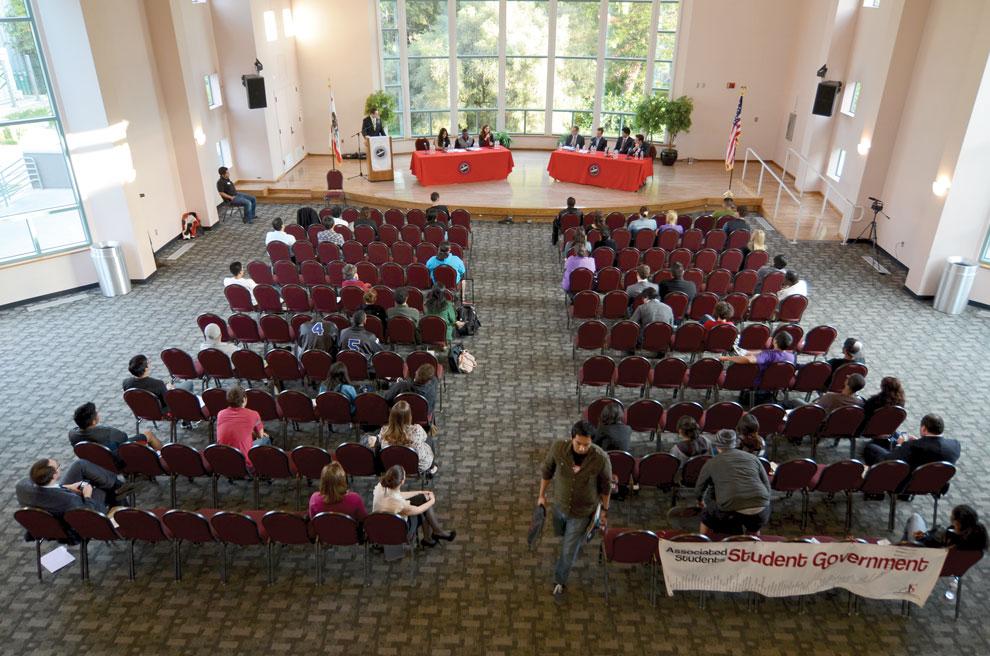 Assemblyman Cameron Smyth, Senator Kevin De Leon and two members of the busniness community hold a town hall meeting for a less than one-third filled Grand Salon. Big Politics aimed at giving students a chance to hear from elected officials and interact with them, but few students took advantage of the event. Photo credit: Ken Scarboro / Editor in chief

California state legislators participated in a round table discussion Thursday about how the state’s budget crisis relates to higher education funding, in the USU Grand Salon.

“It seems to me that if we don’t continue to fund higher education, then we are cutting off our noses to spite our faces,” said King, who believes that a qualified and educated workforce is essential to grow California’s economy.

While all of the invited speakers agreed about the importance of funding higher education in California, they had differing opinions about how to grow the economy and fix the state’s revenue shortfall.

Sen. deLeon explained that unlike the federal budget, which can run a deficit, California’s constitution requires the state budget be balanced each year.

The current economic crisis has severely reduced state tax revenues.  DeLeon explained the only choices for closing California’s $9.2 billion budget shortfall are to cut services and social programs, raise taxes, or a combination of both.

“We’re dealing with a very difficult period, especially for those who have historically been marginalized…single mothers with children, the blind, the disabled, and in this case here at Cal State Northridge, college age students,” deLeon said.

“Is taxing the rich unfair to the rich? Maybe, bu who cares?” said King who thinks Governor Brown’s initiative strikes the right balance in an effort to raise revenue without hurting economic growth through higher taxes.

Attracting businesses to California and keeping them here was a major theme of the discussion, with more than one speaker blaming California’s excessive regulations for stifling business growth.

Flavin said excessive regulation makes it harder for her father, who owns a small business, to operate in California

“Why would a business choose to start up here where there is the highest income tax, where there is some of the worst regulation, whether they’re environmental regulations, or work regulations. Why not go to Nevada or Texas?” she said.

DeLeon suggested that a happy medium can be found between providing incentives to business and protecting worker’s rights, clean air and clean water.

“Texas is the China of the United States – low wages like you cannot imagine, worker protections – doesn’t exist at all whatsoever…..California is a much better place,” deLeon said.

Successful entrepreneur Anders borrowed money to buy his first restaurant with a friend, and now owns Wood Ranch restaurants in 14 Southern California locations, suggested students not rely on government in their pursuit of success.

“Just don’t count on anybody, count on yourself,” Anders said. “Don’t let government or other people or anyone tell you that you can’t do it.”

Whatever their opinions, it was clear that none of the speakers had an easy fix for higher education funding until the economy improves.