Softball: Pagano, Matadors go 0-2 against UCR to fall into tie for last place in Big West 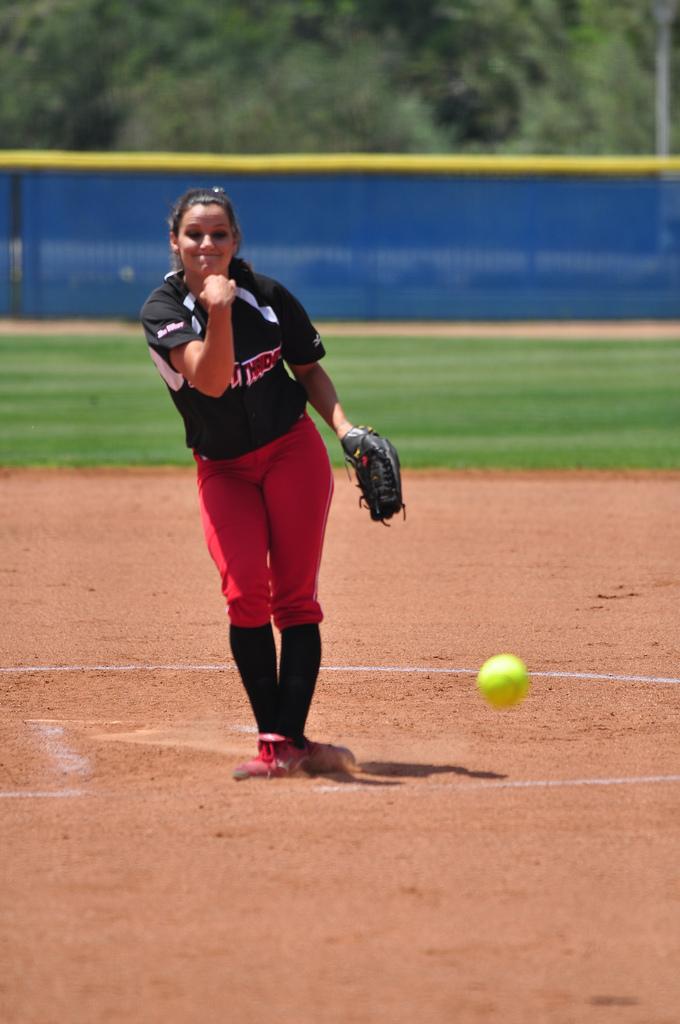 RIVERSIDE – In a season full of struggles, hitting pitcher Mia Pagano has been the brightest spot for CSUN.

So with the Matadors down to their last out and trailing by one in Game 2 of a Saturday doubleheader at UC Riverside, it wasn’t strange to see head coach Tairia Flowers call upon the junior to save them.

“Not necessarily that we tried to put so much pressure on just one player, but just hoping (Pagano) can come in and pick somebody up,” Flowers said.

Pagano, who pitched all of a 1-0 loss in Game 1 and rested all of Game 2 until Flowers’ last-out summoning, came out of the dugout as if shot out of a telephone booth while wearing a big “S” on the front of her jersey.

Unfortunately for CSUN (10-38, 5-12 Big West), Pagano didn’t have much left in the tank and flied out to right field as UCR won Game 2 5-4 to claim its first-ever series win against the Matadors.

Dejected at seeing her team fall into a tie for last place in the Big West, Pagano walked off the field with her head down as teammates put their hands on her shoulder in support, something they had failed to give her earlier in the first game.

Although Pagano only allowed three hits while striking out seven in Game 1, the Matadors provided no run support for her and lost 1-0. It was even more frustrating for CSUN because — despite only recording one hit for the game — it had an unbeatable chance to get the win.

UCR seemingly wanted to give the game away in the second inning. Two throwing errors allowed the Matadors to load the bases with no outs, but they got nothing out of it and the Highlanders escaped unscathed.

“Bottom line, we need a little more execution at the plate,” Flowers said.

UCR third baseman Brittany Keeney had the only offensive highlight of the game: a game-winning home run in the bottom of the fifth.

While defense prevailed in Game 1, offense did so in Game 2.

CSUN pitcher Shelly Tait looked shaky in the first inning and gave up a hit to each of the first four batters she faced ­– two singles and two doubles to put UCR up 3-0 – before settling down and retiring the next three.

To the relief of Tait, her teammates provided some run support and scored two in the second to chop at the Highlander lead.

“We felt the need to back up our pitcher a little more because we didn’t do that in the first game,” said first baseman Madeline Sale, who after going on a streak of 11 games in a row with at least a hit is now on a three-game hit-less mini-funk.

The Matadors exploded for six hits through three innings in Game 2, tying it at 4-4 after a two-run third. After that, the offense went Game 1 again. CSUN couldn’t get on base for the rest of the game.

Riverside used a three-hit fifth to finish it off. Jojo Mendoza’s two-out RBI in the inning provided the final margin.

“It’s frustrating for our team,” said Tait, who went the distance and allowed 10 hits.

CSUN had had its struggles offensively coming into the weekend. Game 1 marked the second consecutive time the Matadors had been one-hit, so Flowers was happy to see her team’s response in the rubber game.

“Hitting to me is the hardest thing in sports,” she said.

With the Matadors in need of someone to come through with a hit in crunch time, it’s no wonder they looked to Pagano. Even if her primary assignment is pitching.

“It’s just nice knowing they count on me,” said Pagano, who has eight wins this season. “I wasn’t thinking of hitting a home run or anything like that, I just wanted to get on base to start a rally going.”

Said Flowers: “Definitely, I didn’t tell her to go in and hit a home run.”

Couldn’t have hurt to ask.