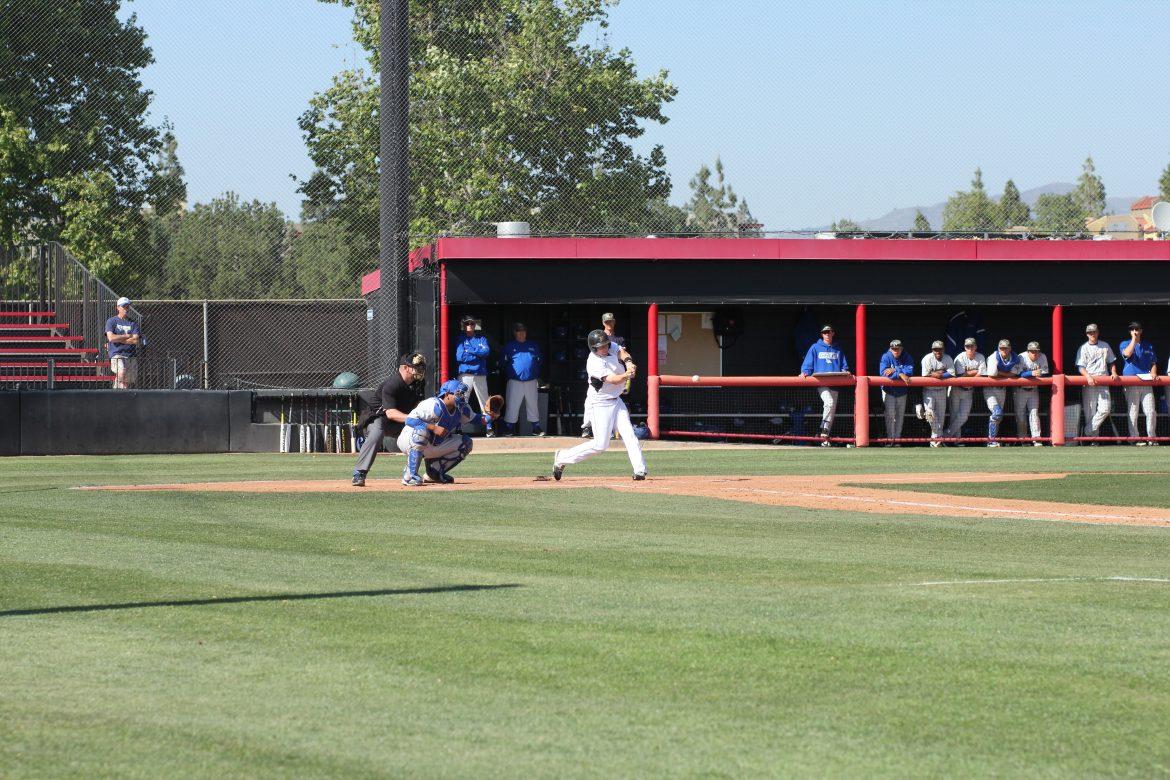 CSUN designated hitter Steven Keller looks to get on base during a game against CSU Bakersfield on April 10. Keller and the Matadors are looking to sweep UC Riverside this weekend. Photo Credit:

CSUN looked to have the advantage heading into the series over UC Riverside and quickly showed its dominance taking the first two games of the weekend for the series win, beginning with a 8-7 victory in 10 innings.

The offense provided the runs while the pitching managed to stave off a Highlander comeback in the first meeting then shut down UCR’s lineup in Saturday’s matchup in a 7-3 win.

On Saturday, CSUN’s Jerry Keel turned in another impressive outing with eight innings on the mound while striking out a career-high six batters.
Keel allowed seven hits and two earned runs en route to his fifth win of the year and his third in conference.

The 2-3-4 hitters in the lineup for CSUN each had three hits compiling nine of the Matadors 14 hits.

Vogelsang came around to score twice while extending his hitting streak to eight games.

Williams notched his sixth home run of the year with a solo shot to start of the second inning. CSUN would go on to take three runs from the Highlanders and not see a deficit in the rest of the game.

Northridge added a combined four insurance runs in the eighth and ninth.

Senior Justen Gorski came in to pitch in the ninth and allowed a run on two hits but it was too little too late for the Highlanders as CSUN came away with the win.

Junior Cal Vogelsang extended his hitting streak to eight games on Friday, while the power bats of Adam Barry and Miles Williams knocked a pair of balls beyond the Riverside walls.

Northridge pulled off another thrilling extra-inning victory in the series opener with a Vogelsang double into right field that scored Raslowsky.

Barry continued his hot hitting with a three-run blast in the first, but junior Alex Muren put the Highlanders right back into the game allowing three runs of their own in the bottom half.

Muren threw 5 2/3 innings and scattered 10 hits but only allowing one more run after the first inning hiccup.

Freshman Ryan Raslowsky paced the CSUN offense with three hits and two walks and came around to score two runs on the day including the eventual winning run.

Redshirt freshman Louis Cohen came in to relieve Muren and pitched 3 2/3 innings of four-hit baseball. Cohen allowed three runs during his time on the mound, but came away with the victory after sophomore Harley Holt closed out the 10th with two Highlander runners on base for the save and the win.