Hunger strike continues as demands are not met 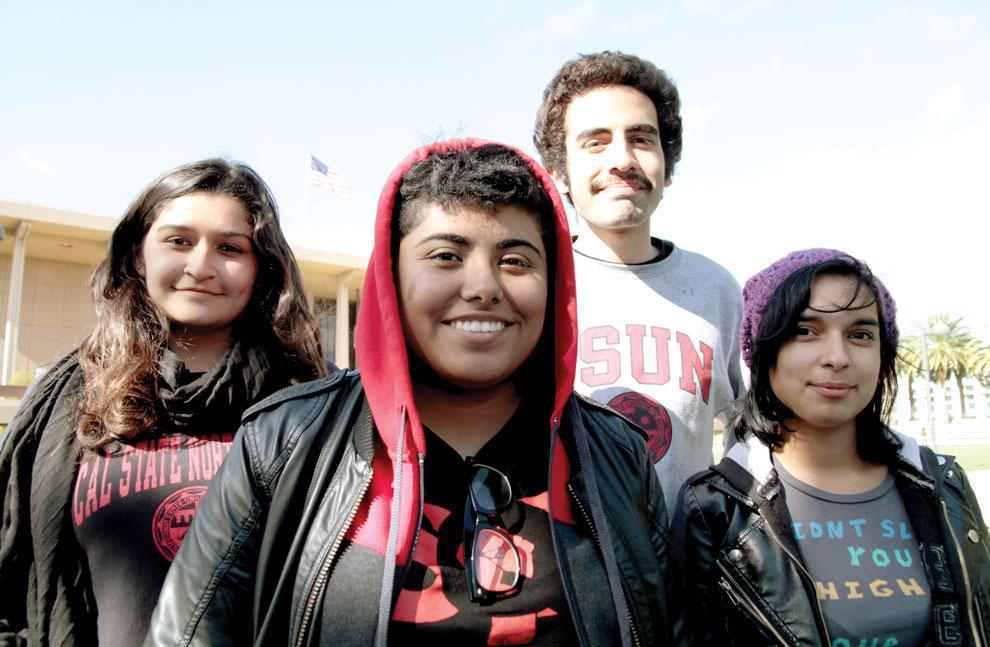 Sarah Garcia, 19, Grace Castaneda, 20, Matthew Delgado, 20, Raiza Arias, 18, particpate in the CSU wide hunger strike to stop budge cuts. "I chose to do it because it seems like the last way to get it done. They have to pay attention to us or thy're going to look terible in the media," said Sarah Garcia on Thursday. Photo credit: Charlie Kaijo / Daily Sundial

The 12 students that are partaking in the current hunger strike to protest against tuition rises and executive and administrative salaries met with Chancellor Charles B. Reed Friday at Long Beach but were unable to negotiate the student’s demands.

According to Sarah Garcia, one of the CSUN hunger strikers, there will be a press release and a recording of the meeting coming out soon.

Though the four CSUN students, Grace Castaneda, Raiza Arias, Matthew Delgado and Sarah Garcia, were unable to attend the meeting the other five CSU’s informed them of what had
happened.

“He absolutely would not bargain with the first three demands and he said he’d work on the fourth one.” Arias said.

SQE’s four demands include a five-year tuition freeze, a salary change which requires Reed and the president’s salaries be reduced to 1999 levels, the elimination of allowances for board members and having all CSU campuses be free-speech zones.

When there was no response from the Chancellor or the Chairman for their demands, SQE announced that 12 volunteer CSU students will be hunger striking. The hunger strike officially began Wednesday May 2, and according to SQE, the expiration date is still unknown.

The hunger strike restricts them for food but allows them juices and waters.

According to Arias, the CSUN hunger strikers are “still going hungry but strong.”

The student’s demands are not possible at this moment and if “we were to freeze tuition we would have to cut classes and not admit tens of thousands of students,” Fallis said.

The CSUN strikers last week were stationed at the quad where they spoke to students and faculty in order to get support.

“We’re not at the quad anymore. When we were there we had our juices made there, we would reach out to students and faculty.” Garcia said. “I’m not sure where/when we will be on campus.”

When asked whether she believes the hunger strike will change anything, Brianda Hernandez, Urban studies and planning major, said “maybe not change to the guidelines they want but definitely be heard like the meeting they are having finally.”

Clem Hernandez, photography major, believes the strike is motivational but will not cause any big changes.

“While I do feel that it is admirable to see students willing to stand up for a cause, I honestly don’t think it’s make a difference,” Hernandez said. “I think it would have more of an impact if more students were involved but even then, with all the constant protest and occupy movements elsewhere, it seems like a bit of a long-shot to expect to yield any real results.”

Nate Thomas, professor of film production option and president of the CSUN California Faculty Association (CFA), believes it is too soon to tell whether the strike will bring any changes but he is very supportive of their decision.

“I cannot speak for the faculty and CFA, but I do believe that most of us are supportive,” Thomas said. “I for one am always supportive of any student activism. One of the students involved in the strike is actually one of our interns.

“They are doing this strike the right way by having medical consultants,” Thomas said.“The CSU has been giving their administration raises and raising tuition so you can’t predict what they’ll do next.”