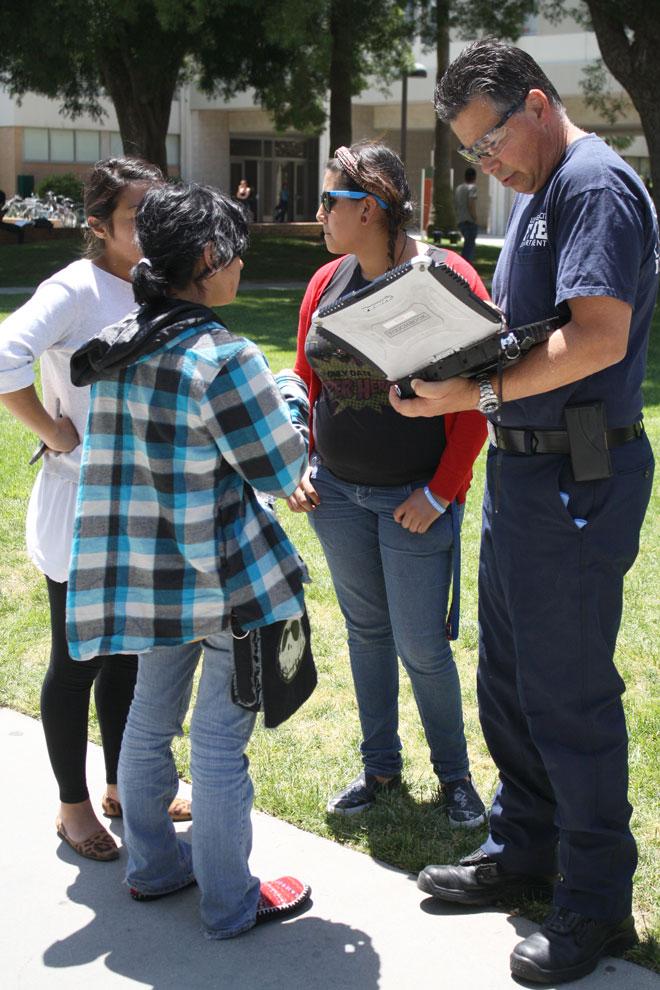 Raiza Arias, 18, double-major in theater and anthropology, gives her information to an officer after collapsing on Monday. Arias is one of the CSUN students who is currently on a hunger strike. Photo credit: Mariela Molina / Photo Editor

A welfare check was performed on one of the CSUN hunger strikers outside Sierra Tower Monday afternoon.

Freshman theatre and anthropology major Raiza Arias looked fatigued and lightheaded after six days of striking as Agustin Garibay, Matador Involvement Center coordinator, passed by and suspected that Arias’ condition needed to be examined and made a call to campus police.

“I was feeling dizzy and half of my body fell asleep. I was like blacking out a little bit,” Arias said. “Relative to what I felt last night, (Monday) was way better.”

Garibay said he was coming back from lunch when he decided to check up on the strikers.

“I asked her a couple of questions on how she was doing,” he said. “Based on her responses, I thought it was important that we have a welfare check.”

L.A. Fire Department arrived at the strikers’ tent a little after 1 p.m. to make sure Arias was in a stable condition.

“My concern as a staff member and a member of the community is to make sure that the students who are on campus, regardless of the program or whatever activity they’re doing, are safe in doing so,” Garibay said.

This health scare comes at the heel of one of the hunger strikers dropping out due to medical reasons. Grace Castaneda, a junior double majoring in political science and sociology, ended her strike because of a high fever and a collapse.

Arias has participated in the hunger strike since the first day and said that it isn’t the first time she has had to seek medical attention.

Prior to Monday’s scare, Arias had just come back from the hospital the previous day after having similar symptoms.

“(Sunday) night, I was tripping out. It’s kind of a mind experience,” she said.

She said that she has an ulcer, but doctors have cleared her but advise that she not continue the hunger strike.

Arias continued by talking about how she felt during each of the days she’s been on strike, with the fourth day being the toughest for her.

After Arias was cleared by LAFD, her friends accompanying her gave her water to help with her current state.

When asked if she would continue with the strike, Arias said she would go on for as long as she could.