Creating change requires both your voice and your actions 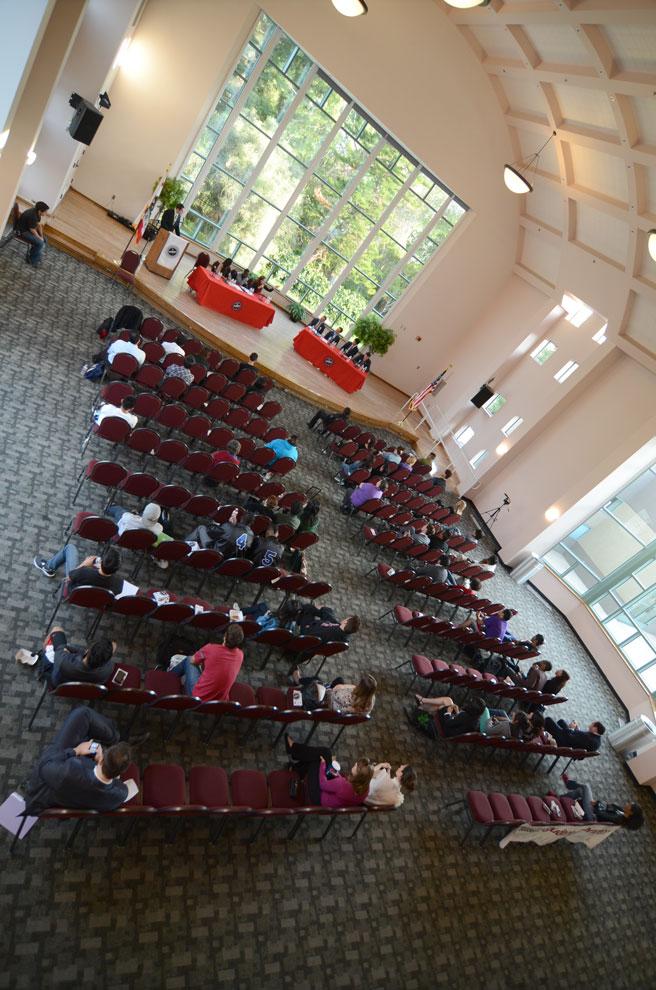 Last Thursday CSUN hosted two events that should have gone hand-in-hand.  “Where’s the Money?” gave an opportunity to learn more about the CSU’s budget and the second Big Politics event provided a chance to meet with people who can directly affect education.

My question for all the students who were at Thursday’s “Where’s the Money?” lecture, all the student activists and all those who were not at Big Politics is: where the fuck were you?

First up in the evening was “Where’s the Money?”, a lecture by Eastern Michigan University accounting professor Howard Bunsis.  He conducted an independent financial analysis of the CSU and several CSU campuses, CSUN being one, and presented his findings in a digestible format.  Not even an hour later was the A.S. Big Politics state-level town hall.  A.S. brought a Republican assemblyman, Democratic state senator and two members of the business community to discuss California’s current political climate and how we can move forward to mend our state.

You should have been there especially if you were at Bunsis’ lecture. Not only did A.S. Senator Cinzia Lettieri invite you at the opening of the lecture, but Bunsis himself encouraged you afterward to go so you could speak to your elected officials with your new-found knowledge.

As for the activists, I know you are pissed at A.S. because they did not invite your Green Party candidate to the national debate and then ejected several of you from the debate. However, Michael Powelson did not reach out to be part of Big Politics, and the first people to throw a hissy-fit were CSUN Greens, not Powelson or anyone on his staff. So how much blame for Powelson’s exclusion really belongs to A.S.? I am just as sick of this two-party political gridlock as you are, but from the childish display you put forth I cannot blame A.S. for ejecting you from the debate. Granted the moderator, KFI conservative talk radio host Bill Handel, was quite offensive in the way he addressed your hecklers, but as we all know, two wrongs do not make a right.

If you think you achieved something through this symbolic challenge of authority, you did.  You successfully proved you are incapable of providing constructive criticism and solidified the view that the fringes are not a serious part of the political realm.

Your absence, be it a purposeful boycott or you just forgot about it, from the state-level forum proved another point. All of those empty seats proved to more elected officials that students do not care. Sure, there wasn’t an open forum portion of the panel, but there was time at the end of Thursday’s Big Politics for networking with the panelists. You could have had one-on-one time with people who directly impact decisions and attitudes about education in Sacramento. Instead, you proved students cannot be bothered to give input and will roll over to whatever Sacramento hands us.

So how about this? For the next installment of Big Politics, grow up: do your homework, look presentable and ask educated questions at the right time (by the way, the right time is not when someone else is speaking).  If we can prove to our politicians that students are educated on the issues, passionate, civilized and unified, perhaps they’ll take us seriously for once.