Celebrate the end of finals at Crazy Harry’s Bar 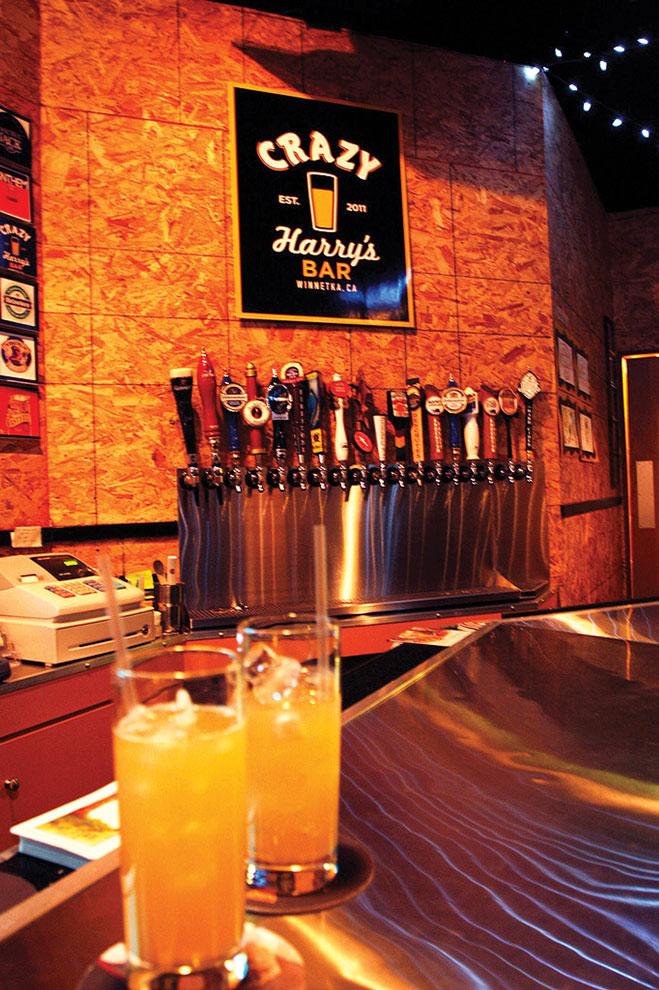 Friendly service, tasty food and ample amounts of beers on tap make Crazy Harry’s the one-stop spot for any student looking to have a good time on a tight student’s budget.

Crazy Harry’s opened up in the closing months of 2011 but have already set up a vibe between their walls, formerly those of the Winnetka Inn., that is far from those of any other new bars in the valley.

Affordable food and over 25 different beer options already had it voted second in the bar section of the Sundial’s annual Best Of CSUN list.

Hidden between some miscellaneous shops on the south west corner of Winnetka and Saticoy lays a comfy bar that could possibly fit 40 people on any given night.

Random vibrant pieces of art hung all around provide the perfect contrast against the unpainted wood walls and tabletops.

Even with it being in its rookie year, the Crazy Harry’s bar top had as many regulars as any other Winnetka bar on a Thursday night.

Crazy Harry’s quirky history is listed on the menu and only adds to the “best friend’s house” environment and carried over in the personality of the bar’s staff.

The bar manager was quick to offer suggestions of his favorite items on the menu without simply pointing at the priciest of options like a server at an Olive Garden.

Tasty burger options, ranging from “Winnetka’s Most Popular Hamburger” and “Brando’s Valley Veggie Burger”, have already earned Crazy Harry’s some buzz on both the streets and the web. Fans on yelp raved about the burgers with multiple reviewers claiming them to be the best they’ve ever had.

“Winnetka’s Most Popular Hamburger” offers a plump juicy patty with all the burger essentials of lettuce, tomatoes, onions and a side of pickles topped off with Crazy Harry’s own special sauce for $6.50.

The contents would bust out from under the soft sesame-less bun were it not for the wooden stake driven down the center of the six-inch high burger.

A half order of the jalapeno poppers will only run you $4 but ooze with cheese and have just enough crunch with the bacon wrapping to make you feel completely fine about cheating on your diet.

Looking for a healthier option? Crazy Harry’s offers a “Chicken Breast Burger Type Thing” sandwich for $7, complete with a garlicky aioli sauce. Also, the menu includes a six-buck salad that you can easily add a piece of grilled chicken to for another $3.

For those looking to indulge, Crazy Harry’s also has beer battered onion rings or fried pickles and dipping sauce before diving into a $4 chocolate brownie cheesecake that will surely be putting nearby bakeries to shame.

When it comes to alcohol, a pitcher of domestic brew will only cost you $9,  compared to the $12-$15 domestic pitchers at bars like Dublin’s and Stove Piper’s, while imported and craft beers range from $12-$15.

Crazy Harry’s doesn’t serve any of your garden-variety vodkas, rums, and gins but still has their version of cocktails made with soju, a type of Korean vodka, and shochu, a type of Japanese whiskey.

Even with the 14-minute drive from the CSUN campus, the delight of enjoying the place that could be vying for the top spot on the Best of CSUN list in 2013 will provide that full, satisfied feeling without a major hit to wallets and purses everywhere.