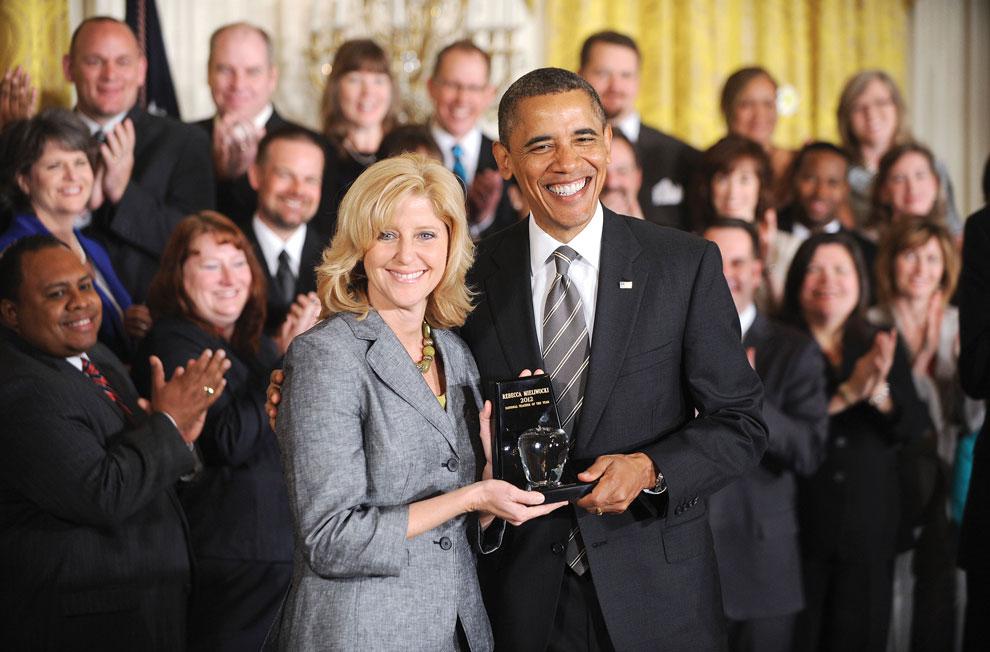 U.S. President Barack Obama honors the 2012 National Teacher of the Year Rebecca Mieliwocki in the East Room of the White House in Washington, DC, April 24, 2012. Courtesy of MCT

At the end of her teaching credential program at CSUN in 1995, Rebecca Mieliwocki decided to go to a job fair on campus, a decision that would eventually lead her to becoming the 2012 National Teacher of the Year.

“I just popped by with my portfolio,” Mieliwocki said about the job fair. “The very first table I sat down at offered me a job.”

“You need to come work for us,” Mieliwocki recalled the recruiter from Burbank Unified saying.

“Maybe I should look at the other tables and see what they offer,” responded Mielwocki.

“No, you don’t understand. We want you in Burbank,” the recruiter came back with.
More than 15 years later, Mieliwocki is a 7th grade English teacher at Luther Burbank Middle School, where she is recognized for her dedication and innovative teaching techniques.

“I felt that I was really prepared for a career in teaching,” Mieliwocki said. “I had a blend of professors (at CSUN) committed to making sure I was prepared. I’ve been teaching for 15 years, and I find that the teachers coming out of CSUN are better than those from other universities.”

Mieliwocki won Teacher of the Year in Burbank, and from there, went on to the county level.

After a lengthy application process and a summer of preparation which included writing a research and essay writing, Mieliwocki was announced as the teacher of the year for Los Angeles County, and eventually for all of California.

From California, she found herself competing for the national award against three other finalists from Florida, Alabama, and a teacher from the Department of Defense who works on a military base.

“Every single teacher from every state was amazing,” Mieliwocki said. “But the four of us, the finalists, really shined through.”

President Barack Obama officially gave Mieliwocki the National Teacher of the Year Award April 23, but Mieliwocki had already known that she won in early March. She was sworn to secrecy about winning until the ceremony where Obama announced the award.

“I had been living with it already for so long,” Mieliwocki said. “I don’t want to say it was anticlimactic, but I think that it would have been a bigger deal if [me, my school and family] had all found out together.”

Nominees for the award are assessed based on their teaching abilities and dedication, as well as their role in the community and ability to perform as a spokesperson for educators.

Originally from Napa Valley, Mieliwocki did not always intend to teach. She finished her undergraduate studies at Cal Poly as a communications major, and originally started her career in publishing.

Working as project coordinator with GTS Graphics, she worked with team of writers, editors and designers putting together textbooks for publishing.

“After I decided publishing wasn’t really for me I decided to go back to school for a teaching credential,” Mieliwocki said. CSUN was her first choice.

Mieliwocki is also a family woman, with an 11 year-old son and a husband who works in the film industry.

It’s just a matter of staying ahead of the challenge by maintaining a balance between her professional life and her family life, she added.

Being teacher of the year comes with responsibility. As a spokesperson for teachers across the country, Mieliwocki will take a year off from teaching duties to tour the country, working with other teachers and giving motivational speeches at various events.

The teacher of the year program is a project of the Council of Chief State School Officers, a nonprofit organization of heads of education from each state that serves as an advocacy and leadership group for education.

“I really enjoyed the process,” Mieliwocki said. “I was thrilled and overjoyed, and humbled because I understand the responsibility of representing educators all over the country.”