Softball: Ready or not: Matadors face UCSB in season finale 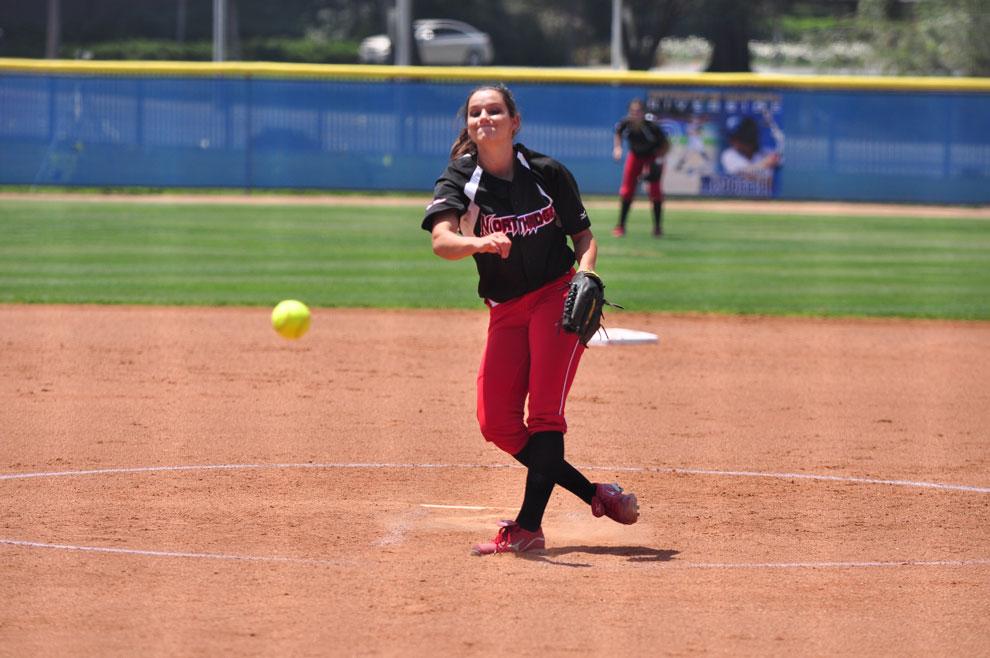 CSUN pitcher Mia Pagano looks for a strike during a game against UC Riverside Saturday. Though the Matadors have only 10 wins this season and a three-game series left, they said they won’t let that spoil their season closer this weekend. Photo credit: Anthony Carpio / Sports Editor

When asked whether they wished the dreadful 2012 season was over already, there was consensus for the most part in the Matadors’ locker room.

Although on the tail end of a year that’s seen it only win 10 games heading into a season-ending three-game series against UC Santa Barbara (27-28, 12-6 Big West) this weekend, Flowers and her players aren’t ready to put an awful 2012 campaign behind just yet. They want more.

The wish might sound a bit masochistic. The Matadors’ lack of wins (10-39, 5-13) in 2012 will have them end the year as the team with the most losses in a single year in the program’s history.

But to the likes of seniors Samantha Sloniker, Alyssa Ray and Jessica Fridwall, this weekend will mark the end of the line in their softball careers.

So maybe it’s not that hard to believe some Matadors aren’t ready for the end.

“This is it for me. It’s scary and it’s sad,” said Ray, a third baseman. “It’s been killing me all week to know these are my last three games.”

Whether it’s just wanting to extend their college careers or perform better or who knows what other reason, CSUN still wants to go out on the field. And with their seniors bidding adieu against the Gauchos, they still have reasons to compete.

While a series win against UCSB won’t erase the woefulness of the 2012 season, it would allow Sloniker, Ray and Fridwall to leave on a “good note.”

“It might not make a difference to other people, but it’s our Senior Day and we want to win for our seniors,” junior pitcher Mia Pagano said.

Having lost five in a row coming into the weekend, the Matadors have a daunting task before them. Just the way CSUN wants to win for its seniors, the Gauchos want to win for a chance at the Big West Conference title.

Far removed from championship talk are the Matadors, who just want to catch UCSB off guard to finish with what would be a light-at-the-end-of-the-tunnel series win.

“Hopefully (the Gauchos) underestimate us,” Pagano said. “We could really prove we’re not as bad as our record shows.”

This season, there was no bigger sign that the Matadors could be better than a 10-win team than a series win at Pacific to begin Big West play. CSUN took two of three from the Tigers, who are also in the running for the conference championship.

That series took place more than five weeks ago. The Matadors have gone 3-15 since, a sign that maybe their record isn’t as off as they believe.

Key word: Believe, which they do despite all the struggles.

“Is it what I expected and what I wanted? No,” Flowers said. “But with it being my second season and with us moving forward, we have a better grasp and can only go up from here.”

After this weekend, the climb to betterment will be without Ray, Sloniker or Fridwall. Ready or not, it’s time to move on.

But against UCSB, the Matadors will try to give them a special sendoff.

“We’re going all out,” Flowers said.