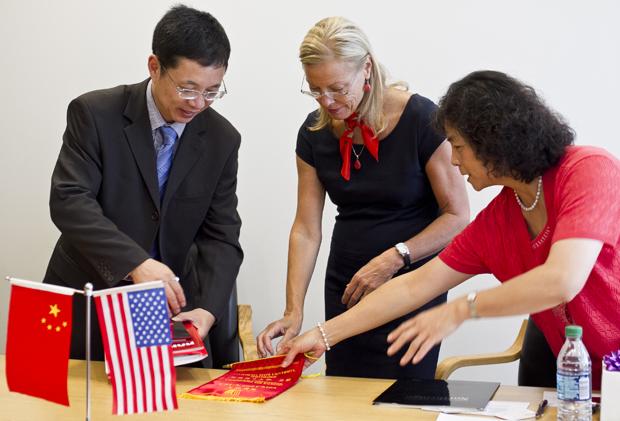 Although CSUN already had 44 partnerships with institutes of higher education in China, this was the first with one in central China, said Dr. Justine Zhixin Su, coordinator of international programs and director of CSUN China Institute.

“There are several layers of meaning to the signing of the MOU (memoranda of understanding). It was the new presidents first MOU with an international partnership, and I was excited to see how excited she was about it and eager to learn how faculty and students can benefit,” Su said. “Short term benefits (to students) include travel, but long term is the benefit to their learning experience.”

Associate dean for the college of education, Dr. Beverly Cabello, own daughter participated in an international exchange to China to learn Mandarin. Although the trip was originally supposed to last one year, her daughter has now lived in China for almost five years.

“She had her reservations before leaving, but as a parent I can see that she has truly blossomed there,” Cabello said.

Her daughter fell in love with the culture and people in China, and after earning her BA in English she stayed to get her masters in linguistics and teach classes on American culture and English composition.

“There is nothing like living in another country, you become far more aware of your own culture and find the pluses and minuses for both,” Cabello said. “It doesn’t matter if you go for six months or a year, you will develop friendships there as you did here, and it will widen your perspective as a human being and professional.”

The MOU states that both universities will actively develop joint teaching, research and creative projects, as well as exchange faculty and students. Institutions will also consider admission of each other’s undergraduate and graduate students, and attempt to provide non-resident tuition waivers to selected candidates.

CSUN has about 600 students visiting from China and 50 visiting scholars, while only four or five CSUN students visit China each year, a number that could easily reach 40 – 50 with tuition scholarships if more applied, Su said.

Students at CSUN work so much that they do not have time, or think they have time, to travel abroad, Su said. Promotion for the program is also typically done through events on campus, that many students don’t attend because they commute.

Su highlighted that each college has their own specialty and CCNU is knows for their arts, music (with a highly acclaimed women’s choir), education and humanities.

“The world really has become smaller, it’s easier to communicate, but seeing is believing. Television and newspapers are not the same as being there,” Su said. “You will leave the experience with a different world outlook, it will be life changing and you will become more desirable to future employers”