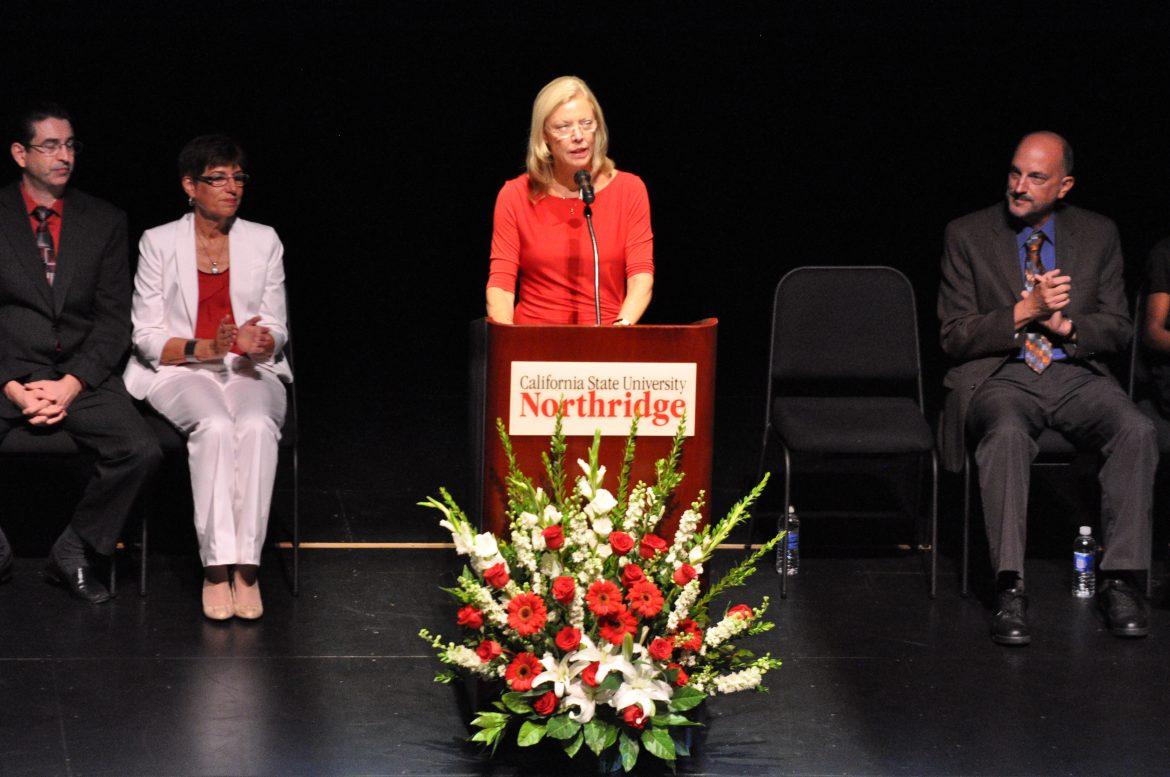 CSUN president, Dianne Harrison talks to students, faculty and staff at the Presidential Convocation in the Valley Performance Arts Center on Thursday.

President Dianne Harrison held her first convocation on Aug. 23 at the Valley Performing Arts Center, where she welcomed about 500 students and faculty.

During her speech, Harrison spoke of CSUN as a source of light.

“CSUN is a shining example of the promise and excellence of public higher education, and a shining light for the community we serve, who are the students who come to CSUN,” she said.

Harrison noted CSUN’s culture of collaboration, problem solving, an unrelenting commitment to student success and initiatives that have changed lives.

“We shine as a culture of unparalleled diversity with an inspiring history and engagement in the community,” she said.

When speaking about the future concerns of the university, Harrison informed the audience that she shares the values and goals that have made the university a success.

“My aspiration is to build on the great foundation that already exists, to continue to make CSUN shine,” she said.

She emphasized student success as a priority, ensuring the continuation of success initiatives.

“My goal is for all students to get the classes they need to progress toward degree completion,” she said.

Harrison also noted the 99 Cents Stores’ $2.1 million contribution to CSUN over the summer to pay full tuition for 120 students over the next four years.

“It gave her a great opportunity to speak about her experience on this campus already,” Watkins said. “Harrison’s focus on student success and completing their degrees is the most important.”

Watkins said her focus on research and pursuing grants will set a new frontier on campus.

“She is a very genuine person with a social worker background and has a sense of caring,” noted Watkins.

Other points in Harrison’s convocation included the budget crisis, which continue to affect the CSU and all of public higher education. Harrison said the federal budget is facing uncertainty as well.

“If Proposition 30 fails, the CSU will have a $250 million cut,” she said. “We must plan to be less dependent on state funding by continuing the momentum that began years ago.”

Alva noted that Harrison’s emphasis on applied research will help involve students in the research process and give value to their academic life.

“(Because of this,) CSUN was awarded $5.5 million to increase the number of low-income students studying engineering and computer science,” she said.

Overall, Harrison continued to emphasize the theme of shining by describing CSUN as a university where people can shine, realize their dreams and share them with others in order to have a successful career.

“CSUN is not just another institution of higher learning, but one of higher enlightenment and vitality,” she said.