Weekly Column: Dodgers boosted their line-up but still have no chance 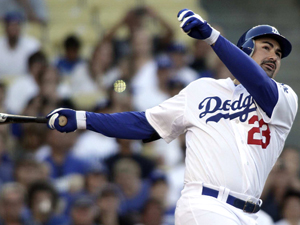 Casey Delich
The Los Angeles Dodgers are making a push to the playoffs, trading for four new players, at a time when restrictions make it nearly impossible to complete a trade like this. Taking on a little more than $250 million in salary from the Boston Red Sox shows the Dodgers want to win, and this is the year they plan to do it.

Though this trade looks good on paper, it is only good for the Boston Red Sox.  While the Dodgers need a hard hitting first baseman, something they have lacked all season, four-time All Star Adrian Gonzalez is not the same player he was three years ago.  Carl Crawford is unworthy of the $20 million a year he earns and may only be able to platoon as an outfielder when he returns next year, and Josh Beckett is past his prime as a staff ace.

With the updated roster, the Dodgers will still be heading home early in the playoffs.  While a playoff berth seems a given now with these new additions, they are missing that 1-2 punch in the rotation that would make them World Champions.

After floundering for eight years under the ownership of Frank McCourt, the Guggenheim Partnership has completed three mega deals within the past month, spending over $2 billion to acquire them in March and promising to bring back the legacy of the team that seemed lost. It seems Guggenheim is making fielding a perennial winner its priority.

“We did this for our fans. We want to win now,” said part-owner Magic Johnson in an ESPN interview. “It sends a message to our fans that we want to win. Our players are very happy.”

Starting with the acquisitions of Hanley Ramirez, a three time All-Star and Randy Choate from the Marlins in July, the Dodgers then traded for the Phillie’s Shane Victorino, and the Mariner’s Brandon League.

Once the trade deadline is passed on July 31, a trade can’t be initiated between teams unless players being moved are placed on the waiver wire, giving the other 29 teams a shot at claiming them.  Starting in order from the worst record to the best, the first team to put a claim on the player may initiate talks with the original team.  The claiming team then may trade the player, pull them back, or release them outright.

This trade was only able to happen because the Dodgers put in a claim for each of the players, and Boston was willing to get rid of them.

With baseball’s new postseason setup, a wild card berth does not guarantee postseason play, making the division title all that more important.  Entering play on Sunday, the Dodgers were two games back of NL West leader San Francisco Giants, and leading the NL Wild Card.

The Dodgers have floundered since acquiring Hanley Ramirez, going 16-13 and continually trading the NL West division lead with the Giants.

The trade already showed signs of promise of a Dodgers’ playoff berth, with Adrian Gonzalez’s first at-bat being a three-run home run. Gonzalez was hitting .300 with 15 home runs and 86 RBis in 123 games for Boston.

Josh Beckett’s debut did not go as well, losing 10-0 to Colorado on Monday, throwing 5 ? innings and giving up 3 runs.  Beckett, who was an integral part of last year’s epic Boston collapse, was 5-11 with a 5.23 ERA in 21 starts this season.

Carl Crawford, a disappointment since signing a seven year $140 million contract in 2010, recently underwent Tommy John surgery, and won’t be back on the field for nine months.

With players moving from the American League to the National League, there is normally performance boost in their numbers, especially for pitchers, according to a recent article on ESPN.com.  The Dodgers hope that Beckett can find the form that made him the 2003 World Series MVP for the Florida Marlins, and a part of Boston’s 2007 World Series win, but in the end, it looks like they won’t have enough to win this year.