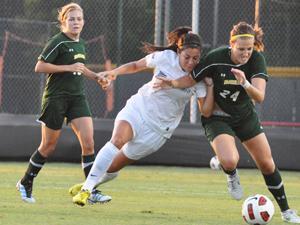 Alex Curran
The Matadors (2-1-1) will try to get back on the winning track tomorrow against the undefeated Michigan Wolverines (5-0), who visit Matador Soccer Field Thursday at 7 p.m.

Senior midfielder Stephanie Galarze got the season off to a roaring start, scoring two goals in the first two games, helping the Matadors to a 2-0 record. She received Big West Offensive Player of the Week honors for her play.

Since, the Matadors suffered their first loss Friday against No. 24 Baylor Bears, and followed it up with a 1-1 draw against Fresno State on Sunday.

Thursday’s game will be a tough test as the Wolverines come to town with an undefeated record, outscoring their opponents 9-1 in their first four games.

Trying to slow down the Michigan offense will be Matadors senior goalkeeper Cynthia Jacobo and senior defender Stephanie Norton.

Norton was named the conference player of the week by College Sports Madness for her performance in the Matadors’ first two games. She is currently tied for the team lead with two assists.

Jacobo, the All-Big West first team goalkeeper, started the season off with two shutouts in the Matadors only wins and has allowed three goals in the last two contests.

CSUN has tallied at least one goal in each of its first four games, but will face a stingy defense in Michigan. The Wolverines have shut out three of their first four opponents.

Senior Forward Melissa Fernandez is tied for the team lead with four points and is the only player to record an assist and a goal for the Matadors this season. Her ability to create plays and finish will be vital against a tough Michigan defense.

Knowing how important this game is for the Matadors, athletics has marked this home game as a Red Rally Night. To increase support and reward fans, CSUN will be handing out free vuvuzelas and CSUN t-shirts to students that attend tomorrow night’s match with a valid CSUN ID.