The sex divider: how to keep your private life private from your roommate 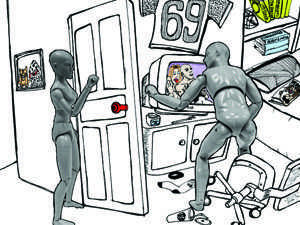 The then 18-year-old graduated high school with honors, began a life of semi-independence in the dorms of UC Berkeley and walked in on her roommate getting nailed on five different occasions – two of them happened to occur on Gail’s bed.

Containing the classic elements of a college horror story, Castillo was stuck with her free-loving roommate for the entire year.

Irritatingly, her roommate believed that Castillo was in the wrong for entering the room without  knocking. The fact that her roommate had partners over for sex while Gail slept, flattened the appeal of her knocking proposal.

Many can identify with Gail, who endured embarrassing and humiliating moments in her dorm life due to one individual lacking a well-built “sex divider.”

A sex divider goes beyond being a decent roommate who never borrows clothes without asking, nor steals your money. Firmly preventing one’s sexual and public life from overlapping in seriously unappealing ways, a sex divider is a mutual agreement reached by all parties who share a personal space.

We don’t have to run for Chick-Fil-A’s moral crusader of the year award. Unless you are interested in opening the door to someone’s metaphorical sex closet, snapping a lock on your sex life should be a given and not an option.

Work with your new roommate and create an environment that promotes open discussion. Set boundaries early on that you can both agree upon. Topics that should be covered in the first few days include food, tidiness, the labeling of materials (acquaintances can be viciously possessive) and curfew. Strangers aren’t fond of drunken roommates stumbling into the dorm at 2 a.m. on a Wednesday.

Most importantly, define what is and what isn’t appropriate sexual behavior while in the company of roommates. Will he or she be offended if you bring your significant other to the room? Is having sex with a partner acceptable if your roommate is not present? If one is having sex in the room, should they hang a tie on the doorknob as a sign? Should one give a heads-up on future “spontaneous” play?

The conversation will be awkward, but necessary- a bit like getting an STD check the day after sleeping with someone on the first date. Without these talks, readers might find themselves in the following situation.

A year ago, Kenny Orwin, a nursing student at Pierce College, shared a small two-bedroom apartment with two other male students for a semester before deciding to move out.

In the beginning, Orwin said things were typical. No one fought and belongings did not mysteriously go missing. Then the steady stream of strange men coming into his living space started. One roommate often invited men over from Craigslist’s “Casual Encounters” section. It was during one of those visits that Orwin had his favorite leather jacket go missing.

“I should’ve said something, but it was a different time for me,” Orwin said. “You leave your tissues lying around now, I’ll put you on the spot in front of your girlfriend or boyfriend.”

Students finding reasons to justify their X-rated actions tend to forget that both parties paid to room with a stranger. No one is king or queen of the pocket sized domain nor should roomates be completely vulnerable to the other’s whims.

Rooming with a stranger is a bit like settling into a stand-still where special considerations and eccentricities might leave one open to criticism or hostility.