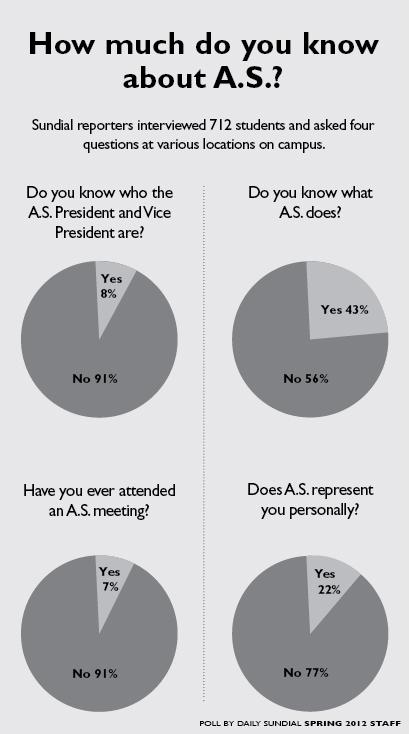 A poll conducted by the Daily Sundial last semester indicated that students are unaware of what their student government, Associated Students, does.

A.S. is responsible for the approved budget of over $7 million, which is distributed to students, organizations and clubs on campus.

Students were asked if they knew who the A.S. president and vice president are, but the majority did not.

Juan Corbera, 28, is a health administration and sociology major and believes it is more important to know what A.S. does rather than who runs it.

“There are a lot of resources that students don’t know. The A.S. always has something going on and always provides students with workshops or speakers from organizations. It’s important to network and search for jobs,” Corbera said.

A.S. recently decided to move their weekly meetings from Tuesday afternoons to Friday mornings at 9 a.m. in the Grand Salon.

Wynter Eddins, a communications studies major, said she does not know what A.S. is exactly, but believes the switch from Tuesday to Friday is a problem.

“Friday is not the most comfortable day because I am not on campus. Fridays are when a lot of events take place, such as sports. I have to leave a lot on Fridays because of these events,” Eddins said.

According to Sydni Powell, A.S. president, switching the meetings from Tuesday to Friday will increase student participation because there are less classes on that day.

The switch will also decrease the time clubs and organizations have to wait in order to receive money for an event, said Powell via email.

“Clubs and organizations will now be able to request funding closer to an event date and will wait less to access their funds. Since club/org funding is one (if not the) most popular and important ways students interact with A.S., we view this type of modification as another service to students,” said Powell in her email.

Beija Piedra, a sophomore majoring in biology, believes the meetings should be held on a different day considering they are “that long and that early.”

A.S. believes in the involvement of the students and are in the process of creating a live feed of their meetings so students who cannot attend will be able to be up-to-date of A.S. actions, said A.S. Vice President Christopher Woolett.

According to Woolett, one of the reasons students are uninformed about A.S. is because of their past marketing strategy.

“I think the strive for us this semester is looking to promote A.S. and having some kind of defined permanent role in how we market to students on a constant basis because there are always new people coming in,” Woolett said.

A.S. will attempt to implement more in-person talking with students on a constant basis this semester, Woolett said.