Q&A with Harry Hellenbrand about his experience as interim president 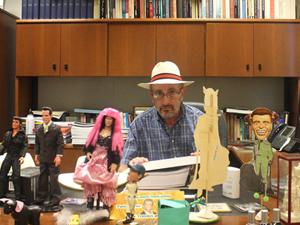 The Daily Sundial had a chance to meet with Provost and Vice President of Academic Affairs Harold Hellenbrand and ask a few questions about his recent-yet-full experience as CSUN Interim President.

DS: What do the dolls on your desk represent?
HH: The dolls were produced by Professor Edie Pistolesi and her students from the art department and they are made for satire. I have 15 to 20 dolls in my room; I am one of the first in the public to see them. The dolls are gifts but also ideas. My favorite doll is Elvis because he looks so campy.

DS: What did you want to be when you were a kid?
HH: When I was young, I wanted to be an architect because I always liked design and mathematics. I played soccer many times as a child and in high school. I played baseball and football as well, but soccer was my favorite sport. I played anything with a ball.

DS: Who are your favorite teams?
HH: My favorite teams are the Boston Celtics, San Francisco 49ers, Oakland Raiders, and St. Louis Cardinals.

DS What have you specifically done in regard to diversity and multiculturalism at CSUN or any other schools you worked for?
HH: In regards to multiculturalism, I worked on the graduation rate at CSUN and worked with LAUSD. I set up better relationships with schools and education overall. I worked on placement tests, making it easier for students to come into a university of their choice. Harvard gave me a solid education. I worked with plenty of people; that had the biggest effect on me. My degree in English was unrelated to my career because I ended up with it by accident; I changed my major so many times.

DS: How was your overall experience as interim president?
HH: I enjoyed being interim president. I never wanted to become president though. It was too many meetings for my taste (but) I saw how much education is valued. I had been here for eight years so the trustees didn’t have a lot to move on.

DS: What was your best and worst memory as interim president?
HH: My best memory was the gradation rate going up and my worst memory was the foolishness with enrollment caps. They thought taking fewer students would force the system to receive more money. We should’ve taken the penalty for it; it would’ve made it easier for staff and students. It’s against my nature but made more sense.

DS: Any advice to new President Dianne Harrison?
HH: My advice for Harrison would be to get to know the culture of the campus as well as she can. I believe she will bring a lot of experience in fundraising, applied sciences, and be able to work in a complicated environment.