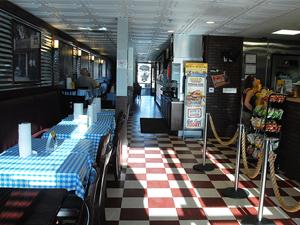 Dickey’s, which  is located at 9035 Reseda Blvd, in Northridge, only opened a month ago, but already it is the home to regulars and hungry crowds.

The original owner, Travis Dickey, opened his first restaurant in Dallas, Texas, in 1941.  Since then, Dickey’s has become a popular restaurant for smoked meat all over the country.

The first impression you get  the minute you  step inside Dickey’s, is that you feel like you’ve just walked into a barbecue picnic at a park. The smell of smoked meat is so incredible and strong, you feel your mouth water. Even if you are a vegetarian or just don’t like to eat meat, you can still tolerate the smell because it is just so delicious.

I couldn’t decide what to try for a while. My stomach wanted it all at once. So, I ordered a smokehouse salad and baked potato casserole and took almost half of it home because the Dickey’s portions tend to be big. The salad had meat, greens, fried onions and cheese, all delicously mixed into a great salad combination. The potato casserole however was decent, but that is probably because Dickey’s  focus is more on the meat.

Nakamura  also explained that they smoke all of their meats in the restaurant just like all their other Dickey’s locations. This is an old tradition that was saved from the 1940s.

“We smoke a whole 600 pounds chunk of meat for 14 hours to get the special Dickey’s taste,” Nakamura says.

When a customer orders they can  see how the meat is prepared by looking behind a glass counter where the cook prepares the meat.

A meat lover can choose from a variety of  sandwiches, salads or meat plates. One meat plate with two sides, sauce by choice and homemade bread will cost you $10.50. Sandwiches are cheaper. You can have BBQ sandwich for $6.00, which is a regular size sandwich or a “Westerner” sandwich, which is bigger, for only $7.50.

For dessert, Dickey’s offers something that everyone, especially kids, can appreciate – free ice-cream with a food purchase.

“We were waiting for this place to open,” says James Valiensi, who walked to the Dickey’s with his wife and son from their home. “It is good to have a place that you can actually walk to.”

Valiensi and his family have enjoyed Dickey’s ever since their first Dickey’s dining experience. They have decided they will come to dine at Dickey’s again in the future. Maybe they should come on a Sunday, because Dickey’s has a special weekly offer – kids eat free on Sundays.