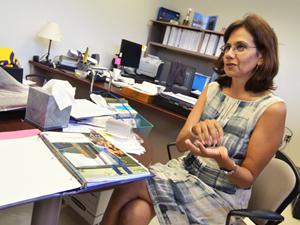 Come September, the Ronald E. McNair Scholars Program will be hit with a $10 million cut made by the U.S. Department of Education affecting more than 200 McNair programs nationwide.

The McNair Scholars Program is one of eight TRIO programs funded by the U.S. Department of Education. The program is meant to help students who are interested in pursuing graduate studies with the goal of obtaining a Ph.D. It is designed for low-income, first generation college students and underrepresented racial/ethnic minorities in graduate education, said Renee Moreno, program director and Chicano/a Studies professor.

“The focus of the program is mostly on upper division students like juniors and seniors and puts them on a path to a Ph.D.,” said Moreno. “It trains students to take the GRE, on contacting faculty, to be good grad students and gets them to do critical research with a faculty mentor that works with them on an original research project.”

The cuts will result in one in every three programs being eliminated from institutions, said Moreno. This means that the CSUN McNair Scholars Program will be in jeopardy of receiving no funding and being cut.

“Having a program like this is so rare for people that really want to make a difference and it’s devastating to see the priorities continue to be misplaced on the federal level,” said Jorge Moraga, former McNair scholar and CSUN student who is in a doctoral program for American Studies at Washington State University.

The reason behind the funding cuts made to the McNair Program is that the funding will instead be given to the Upward Bound Math-Science Program, another TRIO program, said Moreno. The Department of Education is “pitting one TRIO program against the other and they both deserve funding.”

The consequences of cuts to the McNair Program mean fewer scholars of color and a loss of jobs.

“McNair is the pipeline for the diversity we might expect to see in the future,” said Moreno. “People will lose their jobs that are employed by their program if the cuts are made.”

The McNair Program here at CSUN will not know if it will continue to receive funding until September when award letters are sent out, but Moreno says she is hoping the program will get prior experience points for the grant program.

“I hope that someone will recognize that CSUN is incredibly diverse as an institution and is able to get the students who the program is designed for,” said Moreno. “I’m optimistic. I think the grant I wrote is very strong. The program here has very good success rates at placing students in graduate programs.”

Moraga, who first heard about the McNair Program from Central American Studies professor Alicia Estrada in May 2011 and was strongly encouraged by her to apply, credits the program for the scholar that he is today.

There is a lot of action being taken to try and stop the cuts to the McNair Program.

There is also an online petition that is asking the Senate to stop the $10 million cuts to the McNair Program.

For now Moreno says she is strategizing.

“If we get the grant it’s five more years of funding. If not then I can request a one year extension; it’s negotiable,” said Moreno.