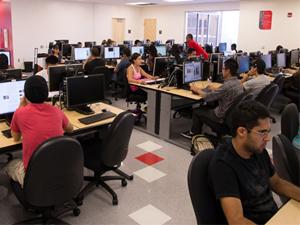 CSUN’s computer lab has moved from the Sol Center to accommodate more computer stations and printers.

The lab, located near the Student Recreation Center between the Pride Center and pool, has 130 computers and seven print release stations, an improvement from the old lab, which  had 69 computers and three print stations, Thornton said.

A new section in the computer lab features stations with a 10-minute limit.

“If (users) need to just print something, they get through this line more quickly,” Thornton said.

Shakuntala Smith, coordinator of computer labs, said a survey conducted showed that some students wanted to just print without waiting in the same line as students wishing to use the computers for longer periods of time.

“This lab came about because of the demand from the students,” she said.

There are 18 workstations with a 10-minute limit and 112 two-hour work stations.

At regular stations, students are allowed to use computers two hours per day and print 20 pages for free at the lab. This page limit also applies to the 10-minute stations.