Women’s soccer: Get to know the Smith sisters 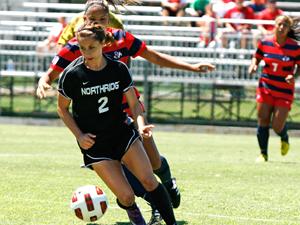 Some students would enjoy attending the same college as their younger sibling, but never have the chance to.

Amanda and Amilee Smith will not only be able to share a campus, but they will come together into another family; the CSUN women’s soccer team.

Following their win against Michigan, the sisters stood together embracing each since Amilee had injured her knee during the match. While Amilee was heartbroken over the injury, Amanda kept her in good spirit like a genuine family member would.

“It’s the best feeling in the world to have my sister with me,” Amanda said. “She has my back and I feel safer with her.”

The sisters show the type of affection towards each other that anybody would be grateful to receive. Not only do they look similar, they act similar as well. Each Smith seems gracious and humble, displaying winning attitudes no matter what obstacle is on the horizon.

The two have spent a majority of their lives playing soccer and have each been their for each other throughout the many seasons.

Both earned accolades in high school, yet both fed off each other’s successes. Amanda received All-Tri Valley League honors during her time in high school while Amilee was a four-year starter in high school and earned all-league and all-city honors.

“It’s easier to play with each other,” Amilee said. “Sometimes she knows me better than I know myself.”

Amanda was thankful for her old head coach at Saint Bonaventure, Clint Greenwood. He helped them with the transition from high school to college.

“The pace is different,” she said. “All the girls are fast and some are big.”

Amanda said their parents told them to give 100 percent in everything they do no matter what.

Amilee was originally supposed to attend Cal State Long Beach but switched to CSUN at the last minute.

Amanda, a junior midfielder, made 18 starts in 2011 tallying a career-high four assists and recorded 10 shots on the year. She already has a goal this season in eight attempts.

Amilee, a sophomore, plays defender and made 10 starts in an inaugural season that saw her take 10 shots.

The two might be mistaken for each other at first glance, but Amilee is three inches taller than her older sister. Amanda admires Amilee’s intensity stating her little sister is “naturally a physical player.”

Despite Amilee’s physical style of play, she was quick to compliment Amanda’s work ethic on the pitch.

Even with the two spending so much time together, both appreciate the soccer bond they share.

According to Amilee, soccer creates a place to escape from the world of schooling and everyday life.

“You can release emotion and anger,” Amilee said. “The relationships you build give you a sense of family.”

Amilee remembered when Amanda scored last year and claimed it was one of her favorite memories.

Amanda might not have the injured Amilee on the pitch with her this season but it shouldn’t come as a surprise if both can be seen after games exchanging tips or on campus simply enjoying each others company.