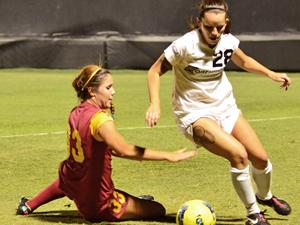 Casey Delich
A Matador offense  couldn’t get anything started, but defended its way to a double-overtime, 0-0 tie with SEC powerhouse Tennessee on Friday night at Matador Field.

Tennessee (5-0-1)came out firing against the Matadors from the first whistle, trying to overpower the defense keeping Jacobo on her toes the whole game.

“We just stuck to our game plan and adjusted to their play throughout, communicating to each other when we needed,” Jacobo said. “I was really comfortable out there and felt no pressure.”

The Matadors didn’t get their first shot until the 28th minute.  Tennessee outshot the Matadors 26-11, including 12-4 in shots on goal.

The Matadors’ shots sailed just over the goal or rolled harmlessly to the goalie.  Junior midfielder Amanda Smith had the closest goal chance of the game, missing by inches on a ball that bounced off the crossbar and out of the goal.

Smith left the game with an undisclosed injury in the 109th minute; the extent of her injury was unknown.  Smith’s sister, sophomore midfielder Amilee Smith, is already out for the season with a knee injury.

Senior defender Katie Russ made the play of the first half that really defined the Matador defense, blocking a shot on an open net to preserve the scoreless draw. With Jacobo leaving the net open to block a header, the ball was headed to an open Tennessee player who kicked the ball to a perfectly-placed Russ in the center of the net.

“It was a phenomenal play,” Jacobo said about the play. “My team always saves me, and it’s not just me alone out there.”

The fast-paced play of Tennessee was something the Matadors were expecting and prepared for.

“They are very fast and kick lots of long balls, with some of the speediest top forwards,” said junior defender Chloe McDaniel. “We just stayed as a unit, with communication and it wasn’t just the back four girls out there, but the whole team.”

Jacobo was the real star of the game with 11 saves, including a pair of diving saves to preserve the draw.

Not only was it an emotional game on the field, but things also got testy on the sidelines between the coaches, over the use of noise-makers by the CSUN crowd.  A stoppage of play was issued in order to sort out the matter with the referees.

“It was just emotions,” said head coach Keith West. “Both of us are intense passionate guys.”

CSUN’s next test is Sunday against USC in Northridge.