Is homophobia fading in hip hop and rap? 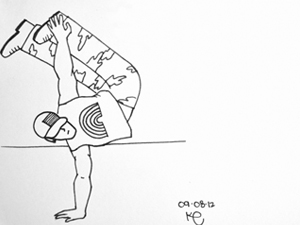 After Frank Ocean’s brave decision to introduce himself to the world as a bisexual man, the hip hop community appears to have taken a new shift on their views on sexuality. The world of urban music has been critically acknowledged as the genre that is acquainted by “machismo” point of views. Gays have been looked down on as “light in their Jordan’s,” sort of speak.

The industry may one day become gay-friendly, but will it reach that point if hip hop and rap artists continue to condone the use of the homophobic, other f-word, “fag,” in their lyrics?

Rap artists such as Eminem have used the word “faggot” to describe a man who is weak-minded or worthy of hatred. The slur appears in several of his songs, such as “Marshal Mathers,” appearing in verses like “New Kids on the Block, sucked a lot of dick, Boy/girl groups make me sick, and I can’t wait ’til I catch all you faggots in public, Ima love it…” Other artists, such as Immortal Technique, 50 Cent, Kanye West and Rick Ross have used it to express hatred to the person they describe as such.

The question is, does using “faggot” have to mean that you are homophobic? Hip-hop artists use the word “bitch” just as frequently in their music. Artists use the b-word to describe both men and women in different ways. When referring to men, it describes someone who is weak, or acting outside of their gender role, and when referring to a woman, it is meant misogynistically. But even female artists use “bitch” to refer to other women, as well as themselves — do the very words really matter?

“Of course, I feel attacked by that word,” said former CSUN LGBTA President Martel Okanji, in an email interview about the f-word. “I mean, for as long as I can remember, society defined my community as fags. (Hip-hop) took it a step further and said it means weak-minded … that is the same meaning it has when someone calls a gay man a fag.”

As ubiquitous as the word seems in the rap community, some have contradicted their anti-gay lyrics or changed their viewpoint on gay culture. For instance, in 2001, Eminem took the stage with Elton John at the Grammy Awards — and ended their performance of “Stan” by holding hands. While it is hard to tell if their performance was a symbol of acceptance or simply a publicity stunt, the “no homo” attitude in hip-hop has changed since then.

“Four summers ago, I met somebody,” wrote Ocean on his Tumblr blog. “I was 19 years old. He was, too. We spent that summer, and the summer after, together. Every day almost, and on the day we were together, time would glide. Most of the day I’d see him, and his smile. By the time I realized I was in love, it was malignant. It was hopeless.”

His newest album, “Channel Orange,” includes a few songs that seem to allude to his romantic experiences with a man. His song, “Forrest Gump” goes, “my fingertips & my lips, they burn from the cigarettes Forrest Gump, you run my mind boy, running on my mind boy Forrest Gump.”

In 2009, Lil Wayne was photographed kissing Birdman on the mouth and wrote about it in the song titled, “Like father, like son,” responding to the machismo-filled industry that was questioning their kiss. In the third verse, Lil Wayne responds, “Birdman Jr. Fuck the world pops. And we goin’ keep it movin’ even if the world stops.”

When Tyler the Creator stated to NME Magazine that the f-word hits and hurts people, one automatically assumes that he is homophobic for overly praising the word 213 times on a 2011 album. Interestingly, his DJ, Syd Tha Kid, who is a lesbian, spun those exact lyrics for him. In the article, he defended himself by stating that his homophobic words do not offend his gay fans.

The question now is, will hip-hop artists ever decide to hit the ‘pause’ button on homophobia and decide to take a stance on gay rights? Some gay rappers are doing so.

Last year, Lil B, an underground rapper, received death threats when he first announced that his album title was going to be titled, “I’m Gay,” but opted to add “I’m Happy” in parenthesis before the release of his album. His alleged fans believed that this was Lil B’s way of wanting to become a mainstream success, but he soon stated that this was an ode in support of the LGBT community.

“The reason why I did the ‘I’m Gay’ album, I really seen that the hip-hop community is being very close-minded and very hateful, very violent,” said Lil B in an interview with MTV.

Le1f, an openly gay New York rapper was recently criticized for proudly showcasing himself in his single, “Wut.” In the music video, Le1f isn’t the typical rapper who has video vixens parading over him, but he is sitting on the lap of a white, muscular male who is covering his face with a Pikachu mask.

Queer female artists are also becoming popular, despite being out about their sexuality. Up-and-coming rap/hip-hop artist Azealia Banks was featured on the Fashion and Styles section of The New York Times Feb. 1, saying she is bisexual, but also that she doesn’t live on other people’s terms and isn’t trying to be “the bisexual, lesbian artist.”

“If Azealia Banks comes out as bisexual, then she better know that is the attention she is going to be getting,” Okanji said. “I feel that artist do a lot of things to get mainstream attention, and you know what, why not?”

Artist like Jay-Z, Rick Ross and T.I. are making a progressive movement for hip-hop when they are becoming supportive of gay culture, asking why people are so offended by something that doesn’t affect them. Artists like Kanye West were able to admit in 2005 that “gays” have become an antonym in the hip hop community and that it should stop.

The themes that hip-hop has transmitted to their young fans have included violence, money and power. After being known as the genre that will never be accepting of homosexuality and lyrically accepting of violence, the hip-hop industry is changing to be more inclusive of the gay community.