Rebels tame Matadors in second half 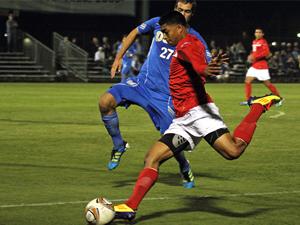 CSUN kept up with UNLV early Friday afternoon, but crumbled in the second half and extended its losing streak to three games in the 3-1 loss.

Two second-half goals were enough to put away a CSUN (2-3-0), which has struggled to finish on numerous chances so far this season. The loss also concludes the five-game road trip that the Matadors began their season on.

CSUN forward Sagi Lev-Ari tacked on his fourth goal of the year to even the score in the first half after the Rebels’ Salvador Bernal helped UNLV (1-3-1) jump ahead.

Northridge’s offense managed to put itself in position on multiple occasions, outshooting the Rebels’ offense 25-17.

UNLV’s victory was its first of the season, netting a season-high three goals on the day. They also snapped a 10-game losing streak on their home field.

CSUN fell behind near the midway point of the first half when UNLV’s Salvador Bernal sent one past Michael Abalos from outside the box. The Matadors would respond just two minutes later when Sagi Lev-Ari scored on a deflection just 20 seconds after being substituted into the game.

Just minutes into the second half, Bernal would again help the Rebels take the lead with an assist to Nick Marshall. The Matadors would try to counter the rest of the afternoon taking four shots on goal before the Rebels sealed the game with a goal in the 85th minute.

The two teams went back and forth for most of the remainder of the second half, before the Rebels added an insurance goal in the 85th minute.

Marshall set up teammate Robert Garcia with a cross right in front of CSUN’s Abalos. Garcia put the ball into the net and pushed the score to 3-1, putting the game well out of reach for the Matadors.

Sophomore forward Edwin Rivas had one of his better offensive outings with nine shots on the day, nearly doubling his Aug. 26 performance, when he put up five attempts.

Rivas failed to convert on any of his shots, managing to put only three on target.

Junior forward Beto Velasquez also helped push the CSUN offensive tempo with an assist and four shots on goal, but he was unable to tally his second goal of the young season.

With the conclusion of the road trip, CSUN returns home Friday for the beginning of a two-game home stand, including its home opener against Army at 7 p.m.